ET409 crash: No official announcement before CVR is found

“The area of search operations off the coast of Naameh is off-limits,” Aridi said during a press conference at Beirut airport.

Lebanon he said will halt recovery of debris unless it was told otherwise by the Ethiopian Airlines company.

“Some of the plane parts were kept in place. If the insurance company wants to retrieve them and ask Ethiopian Airlines for that, then we will do the job,” said Aridi as he showed pictures of the plane wreckage taken underwater.

Search teams on Wednesday recovered the base of the second black box but an essential piece was missing.

“The base of the second black box from the ill-fated Ethiopian jet has been recovered; however, it appeared that the part containing the memory device of the cockpit voice recorder was separated from the base,” said a statement by the Lebanese army.

Aridi has said all equipment and systems on the Ethiopian Airlines plane functioned properly until the moment it crashed into the Mediterranean last month making it unlikely that the jet was brought down by an explosion. 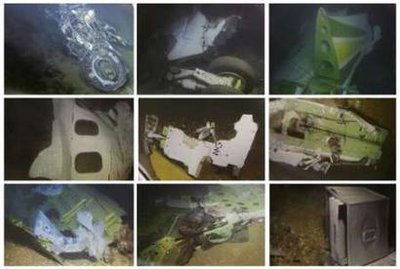 A combo image shows underwater photos of parts of the Ethiopian Airlines plane which crashed into the Mediterranean sea on January 25, 2010, during a news conference held by Lebanon’s Minister of Public Works and Transport Ghazi Aridi at Beirut international airport, February 11, 2010.