Italy will boycott celebrations marking the 31st anniversary of the Islamic revolution in Tehran on Thursday to send a message of concern over attacks on the Italian embassy there.

The protests were reportedly in response to Italian Prime Minister Silvio Berlusconi’s call for strengthening of sanctions against Iran over its nuclear program. allheadlinenews 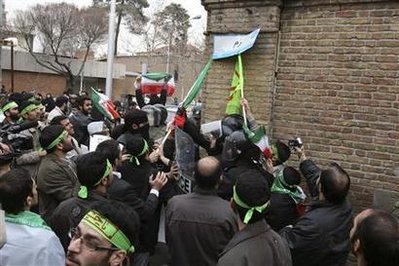 Iranian pro-regime demonstrators tear down a street sign named “Rome”, during a demonstration outside the Italian embassy in Tehran February 9, 2010.