Batroun residents, friends and relatives of Lebanese diver Albert Jirji Assal bid farewell to him during a funeral procession on February 5, 2010 in northern Lebanon. Assal was one of the victims who died when Ethiopian Airlines Flight ET409 crashed into the Mediterranean sea off the coast of Lebanon during a thunderstorm on January 25.

The Ethiopian plane disaster dealt a double blow to the city of Batroun. Albert’s father died Friday from a heart attack caused by his grief, local media reported Friday. According to the reports, Jirji Assal was admitted to Bitar hospital in Batroun, after suffering a heart attack, but later died. 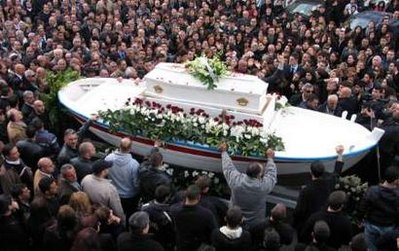