Blair insists he did not deceive the nation 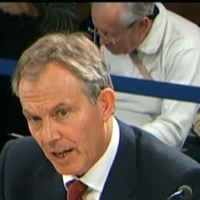 Tony Blair has insisted at the Chilcot Inquiry that he did not deceive the nation over Iraq and defiantly declared that he was right to take action to stop Saddam Hussein, even though no weapons of mass destruction were found.

In his long-awaited appearance beyond the Iraq Inquiry, the former prime minister made clear that it was always his intention to join the Americans if it came to war with Iraq.

“This isn’t about a lie or a conspiracy or a deceit or a deception. It’s a decision. I had to take the decision. I believed, and in the end the Cabinet believed – so did Parliament incidentally – that we were right not to run that risk.” Telegraph