Protest in Lebanon against Egypt-Gaza wall

Lebanese protesters accused Egypt’s president Sunday of acting like an agent of Israel over his country’s construction of an underground steel wall along the Gaza border.

About 200 people took part in the protest near Egypt’s embassy. Crowds set fire to U.S. and Israeli flags. Some of the Israeli flags had Egyptian President Hosni Mubarak’s picture on them.

The protesters also carried banners depicting Mubarak as an Israeli agent, as well as portraits of the president with a Star of David on his forehead. AP 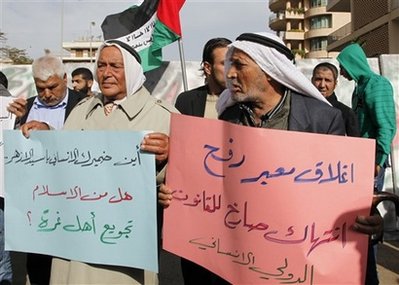 Elderly Palestinian protesters carry banners in Arabic that read, ‘ the closing of the Rafah crossing is a violation of the international humanitarian law,’ right, and ‘ where is your conscience grand sheik of al-Azhar, is it from Islam to starve the people of Gaza’? referring to Mohammed Sayyed Tantawi, Egypt’s top Muslim cleric, as they stand in front of a symbolic wall near the Egyptian embassy in Beirut, Lebanon, Friday, Jan. 15, 2010,