Hundreds of demonstrators gathered on both sides of the Israeli-Gaza border on Thursday to mark a year since Israel’s three-week war in Gaza, and to call for an end to the blockade of the area imposed by Israel and Egypt.

About 85 of the several hundred demonstrators inside Gaza were foreigners, part of a group of more than 1,000 who arrived in Cairo in hopes of entering the territory but were stopped by the Egyptian authorities. After days of negotiation, Egypt permitted a small delegation to cross the normally closed border at the southern Gazan city of Rafah.

On the Israeli side, about 1,000 people rallied in protest as well, most of them Israeli Arabs but also Israeli Jews who object to the blockade. NYT 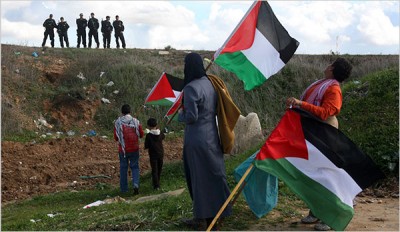 Israeli security officials watched as demonstrators gathered on the Palestinian side of the Israeli-Gaza border on Thursday to mark a year since Israel’s three-week war in Gaza.