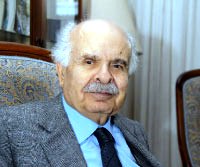 MP Assaad Hardan, leader of the Syrian Social Nationalist Party (SSNP) announced the death of Dr. Anis Sayegh, in a statement issued today calling him an intellectual and national activist and said, “This is a brave man who has dedicated his entire life to defend Palestine and the nation.”

Born in Tiberius, East of Haifa on the western shore of the Sea of Galilee, the son of a Presbyterian minister, Sayegh fled Palestine with his family in 1948. He has lived in Lebanon most of his life since then, first attending the Sidon School and later AUB. He and his Jordanian wife lived in England for five years where he studied and taught at Cambridge. Returning to Lebanon, Sayegh headed the Palestinian Research Center (PRC) for ten years, which at one time had the largest library of books about Palestine outside Palestine.

Sayegh edited the 11 volume Palestinian Encyclopedia, which took around 20 years to complete and is the only encyclopedia in Arabic devoted to one topic. He also served as editor for three magazines during the 1970s and ’80s: Palestine Affairs, Arab Future, and Arab Affairs, the first and only magazine of the League of Arab States. Also active politically, Sayegh has twice been elected to the number two position in the Palestine National Council in 1998 and, most recently, in 2008.

On Jan 1, 2006 he wrote: “I am one of the seven million Palestinians prohibited by Israel from living in my homeland to enjoy my national sovereignty and rights which are guaranteed me by numerous covenants and charters, so that I may live a free and dignified life and practice my traditions, develop my culture and carry on my heritage, so that I may establish a democratic system – which most people desire.”