Pope knocked down by woman during Christmas mass

A woman assailed Pope Benedict XVI on Thursday, yanking him to the floor as he entered St Peter’s Basilica to celebrate Christmas Eve mass.

Video footage showed the woman, wearing a red sweatshirt, leaping over a security barricade and rushing at the 82-year-old pope as he began leading the traditional procession to the vast basilica’s altar bearing a gold cross.

As a security guard tried to overpower her, the woman succeeded in grabbing Benedict’s vestments near the neck and yanking him down, according to video footage taken by a pilgrim broadcast on Sky News.

Several others fell over in the melee.

Prominent French Cardinal Roger Etchegaray, 87, broke a leg in the incident though he was “several metres (yards)” from the pope, Vatican spokesman Federico Lombardi told AFP, adding that the prelate was rushed to hospital.

Benedict was back on his feet within moments and went on to celebrate the mass with apparent calm and confidence. AFP 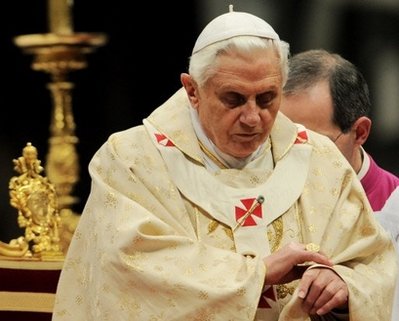