Syrian bus with 25 passengers was attacked in northern Lebanon

A Syrian bus with 25 passengers was reportedly attacked by unknown assailants at 2:30 a.m. (GMT 0030) in Deir Ammar on the road between Tripoli and Akkar in northern Lebanon and a Syrian citizen was reportedly killed in the attack.

Syrian Foreign Minister Walid Moualem has reportedly called his Lebanese counterpart Ali al-Shami with regard to the attack and called on the Lebanese authority to investigate the attack to identify the criminals and those who are behind them and inform Syria the result as soon as possible.

Preliminary investigation has revealed that the name of the victim is Abdullah A.A. 17 and that 7 shots were fired at the bus . 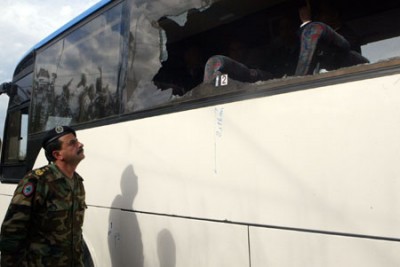