Engaging with the enemy

by yalibnan
628
From his first day in office, President Barack Obama has made engagement the cornerstone of his foreign policy. "
Share: 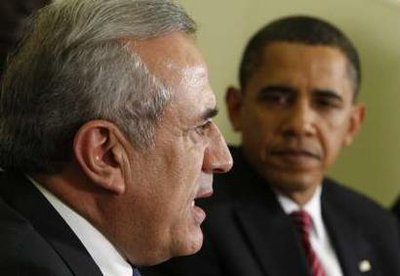 Engaging With The Enemy

From his first day in office, President Barack Obama has made engagement the cornerstone of his foreign policy. “To those who cling to power through corruption and deceit and the silencing of dissent, know that you are on the wrong side of history, but that we will extend a hand if you are willing to unclench your fist,” the president declared in his inaugural address. It has not always worked as Obama hoped. When Lebanese President Michel Suleiman visits the White House on Monday, the unintended consequence of embracing unfettered engagement will be clear.

Obama prides himself on engagement, but too much can be a bad thing. By allowing any item on the agenda, the White House encourages partners and adversaries alike to take maximalist positions. Once on the agenda, any position can gain diplomatic legitimacy, and flexibility and compromise often rewards adversaries. Pro-democracy leaders and advocates who look to the U.S. for leadership and support for their cause will perceive such compromises as legitimizing demands of authoritarian regimes, taking away the hope for change and the belief in the ideals of freedom and democracy for which America stands.

While Suleiman will not say as much, his visit will highlight how Obama’s desire to engage Syria has undermined democracy in Lebanon. During the Bush administration, Washington, Paris and Riyadh cooperated to make Syria an international pariah. International pressure forced the United Nations to launch a Commission to investigate alleged Syrian complicity in the assassination of former Prime Minister Rafik Hariri, an event that unleashed the Cedar Revolution and culminated in the Syrian army’s withdrawal from Lebanon after 29 years of occupation.

Obama, however, reversed Syria’s diplomatic isolation, leaving the Lebanese leadership no choice but to work with Syria. As a result, he snatched defeat from the jaws of victory. Liberals and Lebanese nationalists rejoiced when Hezbollah failed to win a mandate in elections last June. But the celebration was short-lived. Hezbollah used its military strength to filibuster government formation and force the victors to reckon with it. Hezbollah’s post-election threats and intransigence won it an extra cabinet seat and virtual veto power over government decisions.

According to a joke circulating in Beirut, “The birth of Lebanon’s new government was so long and painful that, in the end, a Caesarean had to be performed. The obstetrician was Syria.” The last straw in the failure of the March 14 Movement’s quest to preserve Lebanese independence came on Dec. 2, when, lost behind the headlines of Obama’s announcement of the Afghanistan surge, the Lebanese cabinet endorsed Hezbollah’s right to arms.

How appropriate, then, that Hezbollah is at the top of Suleiman’s agenda. A former head of the Lebanese army during the period of Syrian occupation, Suleiman will lobby Obama to reverse U.N. Security Council Resolution 1559, which two years before the outbreak of war called for the disbandment “of all Lebanese and non-Lebanese militia.” Instead of disbanding Hezbollah, Suleiman will argue that the Lebanese Army should simply integrate it. Rather than eliminate a group responsible for numerous terrorist attacks against American targets, Obama will be asked to acquiesce to its existence. Suleiman will also seek military aid, hoping he will have better luck under Obama than he had under Bush, who, while active in support of Lebanon’s efforts to assert its independence and protect itself from Syrian domination, worried that any U.S. weaponry provided to Beirut could fall into Hezbollah’s possession.

If President Obama truly understands that there is “evil” in the world, as he said when he accepted the Nobel Peace Prize last week, he must recognize that sometimes dialogue does not work. Engagement with Syria may be well-intentioned, but the simple act of sitting down with Syria at the table has come at a high cost. How ironic that a quarter century after a Hezbollah terrorist drove a truck laden with the equivalent of 12,000 pounds of TNT into the Beirut barracks of U.S. Marines killing 241 soldiers on a peacekeeping mission a Lebanese president will request that a U.S. president ship arms, even if indirectly, to Hezbollah. Suleiman’s visit should be a wakeup call.

*Anna Borshchevskaya is a research analyst at the Peterson Institute for International Economics.