by yalibnan
611
Beirut : The second part of the the Vote of confidence Parliamentary session resumed at 6 pm. The first deputy to address it was Lebanon First bloc MP Mohammed Qabbani
Share: 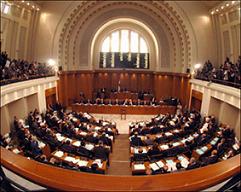 The Vote of confidence Parliamentary session resumed at 6 pm and the first to speak was Lebanon First MP Mohammed Qabbani , who commented “We should not give up on fighting sectarianism and corruption since those are Lebanon’s defects.” He added : I agree that abolishing political sectarianism from the souls should come before any texts . Qabbani called for a prompt action on the issue of oil exploration since studies confirmed its presence in Lebanese waters.

Lebanon First bloc MP Ammar Houri said Article 6 of the Ministerial Statement—which pertains to Hezbollah’s weapons—is contradictory and that the reservations expressed toward it represent the opinion of a large share of Lebanese, and not just “one side.” He requested that “Beirut should be free from weapons,” explaining that “only the presence of legal weapons is to be allowed”.

Hezbollah MP Walid Succariyeh said “We stress on turning a new page with Syria and building Lebanese partnership with Syria, Turkey, Iran and Iraq to establish a new Middle East that lays the foundation to isolate Israel.”

Kataeb MP Elie Marouni said “We [the Kataeb bloc] reject, voice reservation and oppose article 6 of the Ministerial Statement,” which pertains to Hezbollah’s arms. He criticized Hezbollah, saying that its arsenal “contradicts the concept of restricting authority to the legitimate power [of the Lebanese state].” He also questioned whether the state can exist if Resistance acts “as an independent entity from the army.” “The arms were used on May 7 to confront the cabinet’s decisions,” he added.

SSNP MP Marwan Fares said “privatization is not the way for economic reform.” He urged Hariri to implement all articles of the Taif Accord and asked “What are you waiting for to eliminate political sectarianism, form a senate and adopt a new electoral law?”

Hezbollah MP Nawwar al-Sahili defended the resistance said that “Lebanon’s strength is based on its Resistance, which was proven by previous experiences in preserving Lebanon’s borders and army.”

At 9:30 pm Speaker Berri adjourned the parliamentary session until Wednesday at 10 a.m.