by yalibnan
1065
Washington : Not one Arab American was invited by President Barack Obama to the first White House state dinner , but one uninvited Arab American couple managed to get in despite the tightest security on the planet
Share: 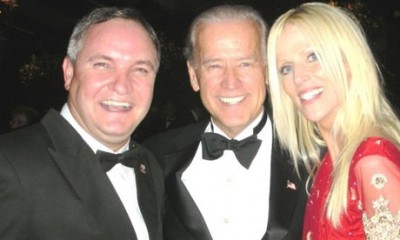 In the ever-more competitive struggle to get noticed, this is going to take some beating. A couple of polo-playing Virginia socialites have managed to swan past some of the tightest security on the planet and gatecrash Barack Obama’s first state dinner as president.

Tareq and Michaele Salahi have Washington society aghast, and the Secret Service in a flummox, after sashaying into the White House, posing for photos with everyone from the vice-president to the marine guards, then posting the pictures on Facebook under the factually challenged caption: “I was honoured to be invited.”

An embarrassed Secret Service – which is so unsecret in Washington that it places recruitment adverts on the back of buses – is scrambling to work out how the couple talked their way past security guards on Tuesday, despite not appearing on the invitation list, to penetrate one of the most protected buildings on the planet.

It was all done, apparently, in search of publicity and a place on The Real Housewives of Washington, a television show oriented more towards glittering social lives than housework.

All that a service spokesman, Edwin Donovan, could do was to reassure Americans that the Salahis posed no physical threat to the president because they were searched, like everyone else attending the dinner, and then state the blindingly obvious. “Initial findings identified a Secret Service checkpoint which did not follow proper procedures,” he said.

The failure of procedure might have had something to do with Michaele Salahi being a striking blonde dressed for the occasion in a red and gold sari – the guest of honour, after all, was the Indian prime minister, Manmohan Singh – even if her rotund husband looked a little less glamorous in an ill-fitting tuxedo.

The couple’s arrival in a stretch SUV, a long queue of guests and a harassed security guard no doubt reluctant to turn back an elegantly dressed former model and cheerleader all played in to the hands of the Salahis.

It also probably helped that, as far back as anyone can remember, no one has ever crashed a White House dinner.

The Salahis swept past the press, stopping for the cameras somewhere among the Hollywood stars and sports personalities who really were on the guest list.

Once inside they posed for more pictures with anyone they could.

Michaele Salahi was photographed with Joe Biden – the smiling vice-president’s arm around her waist, her hand clasped to his chest like a pose from an old James Bond poster – and an array of other politicians, a leading Bollywood composer and the CBS news anchor, Katie Couric.

The couple can also be seen gazing in to the camera with Obama’s chief of staff, Rahm Emmanuel, although whatever they hoped to get out of that fleeting encounter may have been undermined by Michaele Salahi calling him Ron on her Facebook page. But the pair failed to land the big prize of a picture with the Obamas.

What happened after that is unclear. From the pictures it can be seen that the Salahis moved between rooms and on to the dinner tent on the lawn. But there are no pictures of them at the meal and, as there would have been no places set for them at the dinner table, they slipped away to update their Facebook page while the real guests were still dining.

As for their intention, to make it on to television, the show has been filming the couple but has yet to decide whether they are interesting enough, or well known enough, to be included.

When the television company announced plans for the programme in May it said it was seeking “women who have their pulse on the most important cultural events, political galas, gallery openings and fundraisers in Washington society”.

The Salahis are already well-known in Virginia as horse people and polo players, and for a nasty family feud over ownership of a winery. Now they have got the wider attention they were seeking.

They are the only couple from the state dinner to get their picture on the front page of the Washington Post, and they were the source of a mix of merriment at their daring and alarmist speculation on the morning television shows about what would have happened if they had been Islamist extremists. But they are also awaiting a visit from a very annoyed Secret Service.

While Michaele Salahi was effusive on her Facebook page about the honour of attending a state dinner with the Obamas, she was more evasive when the Washington Post asked her why she was there when her name wasn’t on the invitation list.

“It was last-minute attending,” she said.