Inside Hezbollah: How Lebanon protests are breaking ‘fear barrier’ 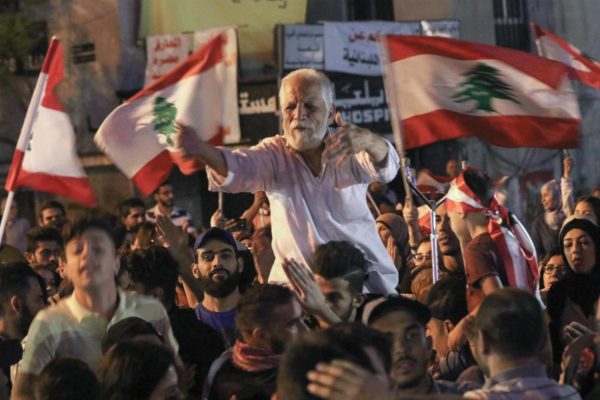 Power corrupts. Is that what happened to Hezbollah, which amassed great influence in Lebanon even as its fighters died in Syria? The bold uprising has brought what were quiet Shiite grumblings into the open.

The veteran Hezbollah fighter can’t count how many times he has been to Syria, and vivid and gruesome battle videos on his phone testify both to his efficiency as a warrior and how effective his units could be in producing corpses of Islamic State and other jihadists.

But the fighter now refuses to return to Syria, and he curses the organization to which he has devoted his life.

The Shiite militia founded to fight Israel has, he says, diluted its brand as it has expanded to battlefields as far away as Iraq and Yemen, lowered recruiting standards, and now faces a cash crunch that has kept its bedrock supporters poor.

Indeed, by one count 1,250 Hezbollah fighters have lost their lives in Syria, with some estimates more than double that. If so, more have returned from Syria in coffins than lost their lives battling Israel since the “Party of God” was founded in 1982.

“We drowned with their lies,” says the fighter, speaking on condition of anonymity amid Hezbollah rules forbidding contact with the media, his tired eyes set in a face thick with stubble. “The leaders are getting richer with corruption. I am willing to fight Israel, but … you die in Syria for nothing.”

His unhappiness is reflected in the choice of many Shiites from traditional Hezbollah strongholds to join a nationwide uprising against endemic corruption, sectarianism, and chronic lack of services, which is calling for removal of a political system in which Hezbollah has grown to play a dominant part.

Gone are the days when Hezbollah basked in the glow of widespread respect in Lebanon for building a “society of resistance” against Israel, when it provided services and support for its long-neglected, impoverished Shiite constituents, and when ideological and religious rigor put it above politics and beyond the taint of corruption.

“Now Hezbollah are punishing themselves [because] they know they made a big mistake expanding into Syria, Iraq, and Yemen, because they are losing their base of support,” says the fighter, who wears camouflage while talking in his shop, his two military radios and a pistol on the countertop, and several assault rifles tucked out of sight.

“The most important thing is, if a person cannot feed and support his family, what is he doing with Hezbollah?” asks the fighter, saying that the $600 per month salary is not worth dying for in Syria.

“We can do nothing with that in Lebanon. And they [leaders] drive Range Rovers, very rich, don’t care about anybody. It’s a big problem,” he says. “People can’t take it anymore.”

Such grumbling against Hezbollah has grown quietly for years behind closed doors. But when street protests erupted Oct. 17 – sparked by government plans to tax free social media calls – the Arab Spring-style uprising attracted Lebanon’s disgruntled Shiites as much as every other sect.

“Now the fear barrier is broken,” adds the Hezbollah fighter matter-of-factly. “People see the reality on social media; they can’t lie anymore.” Mobs loyal to Hezbollah and the Shiite Amal movement attacked protesters in late October with sticks and pipes, and destroyed some tents, in a failed attempt to intimidate them.

But Sheikh Hassan Nasrallah, the Hezbollah leader, has since sought to strike a careful balance, making clear the organization embraces the “legitimate” demands of the protesters – against corruption and for better lives – while saying that toppling the government is not the solution.

Sheikh Nasrallah said foreign hands were directing the protests, as were tainted pro-West parties “looking for political revenge and settling of accounts.”

But there is no hiding the fact that benefits to both Hezbollah fighters and the party’s supporters – underwritten for decades by volumes of cash from Iran – have shriveled in recent years, as both Iran and Hezbollah have financed expensive military deployments, especially to prop up Syrian President Bashar al-Assad, and been stung by tough American sanctions.

Hezbollah is experiencing a paradox at the moment,” says Nicholas Blanford, a Beirut-based fellow at the Atlantic Council and author of “Warriors of God: Inside Hezbollah’s Thirty-Year Struggle Against Israel.”

Though Hezbollah has never been stronger militarily or politically, he says, “at the same time they are facing a host of vulnerabilities that they haven’t had to deal with before.”

One reason is the vast and speedy expansion to perhaps 25,000 fully trained combatants after Hezbollah fought Israel to a standstill in mid-2006 after 33 days, in a devastating conflict Mr. Nasrallah called a “divine victory.” Until then, for many years, the group fielded just 3,000 to 5,000 fighters, who often had one or two years of religious training before they were allowed to pick up a gun.

By contrast, since Hezbollah began its Syria intervention in 2012, recruits often get a month of military training before being sent to Syria, where they are meant to absorb Hezbollah’s ideology on the job.

Another vulnerability is the shortage of cash, due to U.S. sanctions targeting Iran and Hezbollah and the high cost of fighting abroad, which by one count cost Hezbollah upward of $20 million per month in Syria. On the streets, protesters have told Mr. Nasrallah: “Lebanon is more important than Syria.”

Yet another Hezbollah vulnerability is its political power-broking with ruling Christian, Sunni, and Shiite Amal factions renowned for their sectarianism, corruption, and failure to provide services like water and electricity.

The overall result may be a watershed moment for the Shiite militia, which looks to Iran’s supreme leader, Ayatollah Ali Khamenei, as its top religious guide. Aside from military and fiscal overreach, Hezbollah is now part of an entrenched government structure it long despised.

“I don’t really see how Hezbollah can reverse this,” says Mr. Blanford, who has been reporting as a journalist on the group since the mid-1990s. “I think Hezbollah has reached its peak. It’s got too big for a small country like Lebanon.”

Still, there are plenty of believers in the Hezbollah cause. One 25-year veteran of Hezbollah, a unit commander with multiple tours in Syria and one in Iraq, waves off the dangers of popular unrest and says the group has never been stronger.

“If Hezbollah opened fire on people [who are] against them in Beirut, it would not affect the base support of Hezbollah,” asserts the stocky fighter with penetrating eyes, who gave the name Ali. “Why? Because I can assure you that Hezbollah supporters will not budge. We went through worse than this, and the resistance still had support.”

He says any fighter that thinks his $600 monthly salary is too small is free to go.

“As devoted fighters with paychecks, we really weren’t affected much. But our supporters did suffer,” says Ali. “Ideology plays a big role here. Even supporters – yes they are hurting, yes they are below poverty level – but at the end of the day you have to understand that Hezbollah worked hard through the years on the ideology, [which] is strong, strong, strong.”

But that distinctly Shiite belief structure, which idolizes resistance and jihad as a religious obligation, runs thinner in newer recruits.

“Now we are recruiting a different quality of people, a second tier, because we need them,” says Ali. “They are not as devoted as we are, but we need them, and we are working on them very hard, as far as discipline and ideology.”

Hezbollah’s influence over its Shiite strongholds has long kept a lid on public displays of discontent. Which is why protests erupting in them in mid-October – as they did across the nation – were taken as a sign by some.

“When people in the south start going to the streets, that’s when you know the fear is gone. … That’s when we knew it was a real revolution,” says Nisrine Hammoud, a protester from the northern Sunni city of Tripoli.

Even when Sheikh Nasrallah asked supporters not to join the protests, Shiite followers like Alaa, from the eastern city of Baalbek where Hezbollah has a strong presence, chose to persevere.

“[Nasrallah’s] priorities are different from our priorities,” Alaa told the Al-Monitor news website. “We want to change the system, get ourselves a better life … while Hezbollah’s priorities are keeping the system and making sure they are on good terms with their allies.”

That means Hezbollah may be at a historic crossroads, as it weighs its reaction to the uprising.

“Hezbollah is very good at resistance, but they are not very good at politics,” says Rami Khouri, a professor at the American University of Beirut.

“It is a moment when they have to reevaluate how they engage in politics based on the sectarian-anchored consensus model. They’re central players – even the kingmakers – in that,” says Professor Khouri. “Therefore, they get a lot of the blame for all of the bad governance that’s happened, even though they weren’t ruling themselves. And they’ve deserved a lot of the blame, because they’ve allowed their partners to be very corrupt and very inefficient, and to treat citizens with disdain.”

That association is rubbing off on a military force that for many years could do no wrong.

“Hezbollah is very good when it’s feeling comfortable and secure. Then they can be quite magnanimous,” says Mr. Blanford, the Hezbollah expert. “But when they come under threat, they’re not very good at dealing with it. They tend to use a fist rather than kind words. And people begin to bristle. They feel the weight of Hezbollah on their shoulders.”