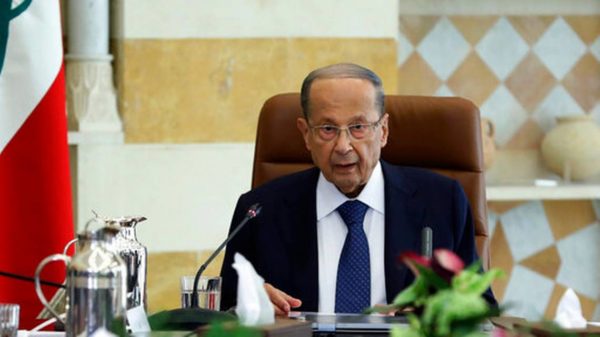 Lebanese President Michel Aoun appealed to Arab neighbors on Tuesday for help to revive his country’s economy, driven to the brink of collapse after weeks of unrest that have brought down the government.

Aoun met with Arab ambassadors in Beirut to discuss Lebanon’s ongoing upheaval, according to his Twitter account. before his  live  interview on television at 8:30 p.m. local time.

Attempts to secure financial assistance from Gulf allies have so far come up empty. Meanwhile, Lebanon’s finances are becoming ever more precarious as it suffers shortages of foreign currency and even fuel, while struggling to attract bank deposits, a key source of funding for the government.

The president is leading the search for a new government after the resignation of Prime Minister Saad Hariri. The premier had been backed by Saudi Arabia, but the kingdom gradually withheld support as the influence of Iranian-backed Hezbollah over the government grew. It ignored Hariri’s pleas for financial aid to avert a looming debt crisis.

Aoun also met with representatives of the International Support Group, which was created in 2013 and includes the United Nations and the governments of China, France, Germany, Italy, Russia, the U.K. and the U.S. The president has yet to schedule binding parliamentary consultations to name a new premier who would then form a government.

The country has been paralyzed for nearly a month as nationwide protests ramp up pressure. Their momentum shows no signs of stopping, with demonstrations outside key state-run entities including the electricity company and ministries. Protesters Tuesday also held a sit-in outside the Judicial Palace, asking judges to remain neutral and look into corruption allegations.

Protesters say the political elites have misused public funds for their own profit for years, neglecting living conditions and leading the country on the brink of bankruptcy. The are demanding a government of experts that’s able to steer Lebanon through a financial crisis.

Bank employees observed an open-ended nationwide strike Tuesday, asking lenders to be more flexible with clients to avoid possible confrontations. Videos of people clashing with bank employees have surfaced in recent days after restrictions imposed on withdrawals and the transfer of funds abroad.

Central bank Governor Riad Salameh asked lenders Monday to ease some of the curbs, particularly those that have impacted traders and businesses, to avoid a possible shortage of goods. He also allowed lenders to borrow from the central bank in dollars at an interest rate of 20%.

Public and private schools are also shut and employees of the telecommunications sector have announced a strike, demanding that any privatization of the industry as announced by the government should preserve their rights.