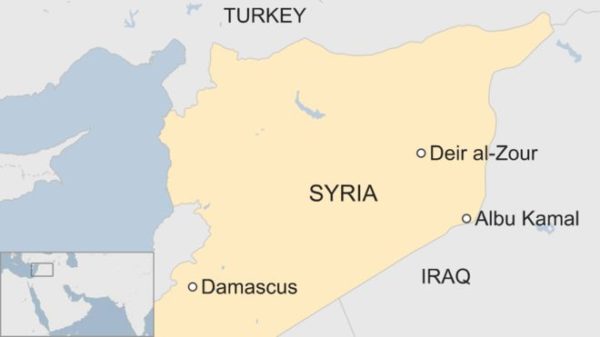 The Syrian Observatory for Human Rights, a UK-based monitoring group, said at least 18 Iranian and pro-Iranian fighters were killed.

It was not clear who carried out the overnight strikes in and around the town of Albu Kamal.

But Israel has carried out hundreds of attacks on Iranian-linked targets in Syria during the country’s civil war.

It has sought to thwart what it calls Iran’s “military entrenchment” in Syria and shipments of Iranian weapons to militant groups such as Hezbollah in Lebanon.

The Syrian Observatory for Human Rights cited its sources as saying the unidentified warplanes had bombed bases, arms depots and vehicles belonging to Iran-backed militias in al-Hizam al-Akhdar and other areas around Albu Kamal.

Omar Abu Layla, a Europe-based activist from the DeirEzzor 24 group, said powerful explosions were heard across the town, and that there was a “state of chaos and panic” among the militia fighters.

Another activist group, Sound and Picture, cited medical sources as saying 21 people were killed, and that militias had taken all the bags of blood at Albu Kamal’s hospital to treat their wounded fighters.

A source from an Iran-backed Iraqi paramilitary force, the Popular Mobilisation, told the BBC that a drone had targeted its headquarters on the Iraqi-Syrian border, about 6km (4 miles) south of Albu Kamal.

The force had sent vehicles from the nearby Iraqi town of al-Qaim to the scene because of the large number of casualties, the source added.

Hours later, a number of rockets were launched towards Israel from the outskirts of the Syrian capital, Damascus, but failed to hit Israeli territory, according to the Israeli military.

It blamed militia fighters operating under the command of the Iranian Revolutionary Guards’ Quds Force, but said it held the Syrian government responsible.

Meanwhile, Hezbollah said its fighters had shot down an unmanned Israeli drone over southern Lebanon early on Monday and seized it.

The Israeli military said one of its drones “fell inside southern Lebanon during routine operations”. It did not give a reason, but said there as “no concern information could be taken from it”.