American Jewish anti-occupation organisation IfNotNow has begun its campaign to press 2020 Democratic presidential hopefuls on their positions on the Israeli military occupation of the Palestinian people.

In doing so, the group hopes to “push the candidates past giving lip-service to a two-state solution without recognising the underlying dynamics and explicit moves by the Israeli government that are creating a one-state reality where Palestinians are denied basic rights,” explained co-founder Emily Mayer.

IfNotNow was established in 2014, during Israel’s 51-day war on the Gaza Strip dubbed “Operation Protective Edge”, by “young Jews angered by the overwhelming hawkish response of American Jewish institutions,” according to the organisation’s website.

Last month, a number of group members met with Vermont Senator Bernie Sanders, posing with a banner that reads “Jews Against the Occupation”. They reported, “Our members in NH [New Hampshire] just asked @BernieSanders if he’s also an anti-occupation Jew and looks like the answer is YES!”

Sanders has typically been one of the strongest critics of Israeli government policy, describingIsraeli Prime Minister Benjamin Netanyahu’s government as racist over its treatment of Palestinians, citing Israel’s Nation-State Law as an example of the rise of authoritarianism around the world and boycotting this year’s conference of the powerful anti-Palestinian lobby group in the US, American Israel Public Affairs Committee (AIPAC). 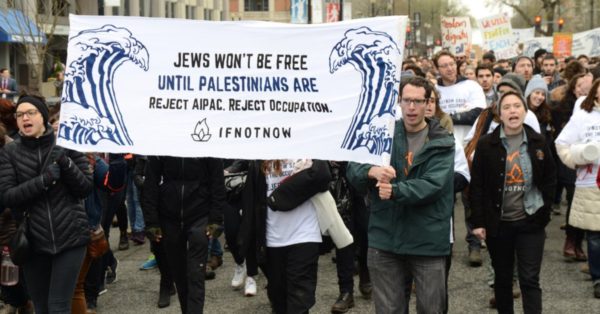 Earlier this month, two IfNotNow members asked Massachusetts Senator Elizabeth Warren if she would push the Israeli government to end occupation, just as she is working to fight corruption in the US, to which she responded, “Yes, yes. So I’m there.” 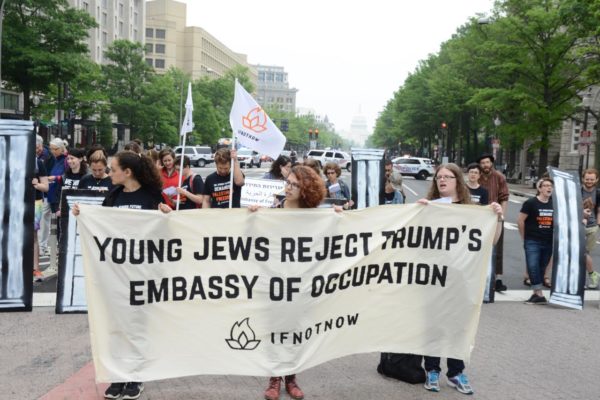 In the past, IfNotNow noted in a press release, Warren has attended events hosted by AIPAC and called Israel a “strong ally in a tough neighbourhood”. But now, her views have shifted to be “farther in line with her progressive values”, as evidenced by her boycott of this year’s AIPAC conference and Netanyahu’s speech in Congress and her resolution decrying Netanyahu’s proposal to annex the West Bank.

The IfNotNow member who spoke to Warren is hopeful that Warren has committed to pressuring Israel to end its occupation and “eagerly awaits the specifics behind [her] new, bold commitment.”

On Friday, Pete Buttigieg, presidential candidate and the mayor of a city in Indiana, said: “The occupation has to end.” He made the distinction between caring about Israel and opposing the “right-wing policies of the Netanyahu government” and said that as Israel’s greatest ally, it was the US’ role to “guide them into a better place”.

According to the IfNotNow press release, Buttigieg has espoused pro-Israel views in the past, participating in an Israel propaganda trip last year and blaming the suffering of Palestinians in the besieged Gaza Strip on Hamas. His views have changed slightly since he entered the presidential race, when he announced that Americans wouldn’t pay for Netanyahu’s plans to annex the West Bank.

However, only a few days later he said that he would keep the American embassy in Jerusalem. In December 2017, US President Donald Trump unilaterally declared Jerusalem Israel’s undivided capital and in May 2018 moved the US embassy to the Holy City. Since then, in contravention of international law, Tel Aviv has increased its Judaisation policies in the occupied city.

IfNotNow emphasised how Buttigieg and other candidates had yet to specifically detail the way they would “use American leverage to pressure Israel to end the occupation”, but were hopeful that they were making good progress.

Former Vice President Joe Biden told IfNotNow members on Saturday that “the occupation is a real problem” and called settlements “unnecessary”. However, he deflected to his record when asked whether he would pressure Israel to end the occupation.

In a later conversation, he was asked the same question and “retreated” into AIPAC’s false talking points, such as “Not one single solitary Palestinian has said, ‘I agree that there will be a Jewish state in the region.’”

During Biden’s time in the Obama administration, the Israeli occupation “became more permanent than ever”, as he gave the Israeli government “a free pass” to expand settlements, attack Gaza and lay the foundation to annex the West Bank, IfNotNow noted.

They also criticised Biden’s blaming of “both sides” for the occupation and expressed their frustration at Biden’s “tired Democratic rhetoric” that doesn’t actively hold the Israeli government accountable for its policy of violating Palestinian human rights. “We will not accept more harsh rhetoric not backed up by real action,” IfNotNow tweeted.

This weekend, IfNotNow members approached New Jersey Senator Cory Booker and asked if he thought that the occupation was a human rights crisis, given his strong positions on criminal justice reform in the US. Booker refused to refer to the occupation by its name and answered, “You’re not gonna get me to address that question as you want.” He also said: “If that’s your issue I would understand if you want to support somebody else.”

IfNotNow criticised him for his ties to AIPAC, saying that “he’s choosing AIPAC over the grassroots.” Booker has been a staunch supporter of the powerful lobby group, speaking at their conferences despite calls from activist groups to boycott them. He has even said that he “text messages back and forth like teenagers” with AIPAC President Mort Fridman.

Booker is a cosponsor of the Israel Anti-Boycott Act, or Senate Bill 720, which would change American export law to discourage domestic companies from boycotting Israel. He is the only 2020 Democratic candidate from the Senate who is a co-sponsor, after New York Senator Kirsten Gillibrand withdrew.

Most recently, on Monday, former Texas Congressman Beto O’Rourke was asked if he would directly pressure the Israeli government to end the occupation as president. In his answer, he did not use the word “occupation” at all and criticised both Palestinian and Israeli leadership for the immobilisation of the peace process.

He ended by saying, “We cannot impose that solution on anyone.” IfNotNow criticised him for “supporting endless occupation in practice” by refusing to pressure the Israeli government and highlighted the need for concrete action rather than empty words.

IfNotNow also noted that O’Rourke’s answer seemed to be repeating talking points that the lobbying group Democratic Majority for Israel, the “AIPAC for Democrats”, had sent out for presidential candidates to refer to when asked about the occupation.

Beto has previously taken some pro-Palestinian stances, such as when he called Netanyahu a racist and boycotted the AIPAC conference this year. IfNotNow expressed their disappointment that this cycle he was more focused on lobby groups coming after him.

Acknowledging the Israeli military occupation as a human rights crisis and serious problem is the “baseline position every 2020 candidate needs to take”, according to IfNotNow. As they continue to bring the occupation into the centre of the presidential race, they seem hopeful that candidates will come out with concrete plans to pressure the Israeli government.

Some of the candidates yet to be approached are Senators Kamala Harris, Kirsten Gillibrand and Amy Klobuchar, New York Mayor Bill de Blasio and former Secretary of Housing and Urban Development Julian Castro.