Hot-button issues on the agenda of G20 : Migration, trade and shooting war 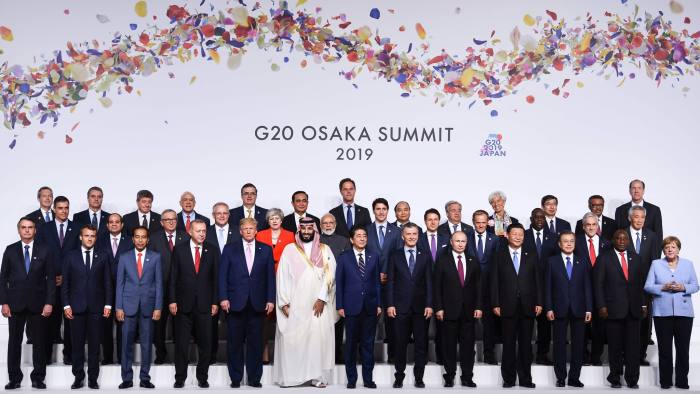 Leaders from the Group of 20 nations (G20) will meet in Osaka, Japan starting Friday for a two day summit. FRANCE 24 takes a look at the hot-button issues that will dominate discussions.

Leaders of Group of 20 (G20) nations gathering in Osaka will find the talks agenda dominated by the words and actions of US President Donald Trump. High on the agenda will be the ongoing US-China trade war, a potential shooting war with Iran and migration from Latin America; one the issues that propelled Trump into office.

While Iran is not a G20 member, it will very much be there in spirit as the threat of war with the United States looms after a series of incidents in the Gulf and escalating rhetoric an Iran’s nuclear ambitions the focus of US ire.

Since President Trump took office, US-Iran relations have cooled just as the rhetoric has grown more heated, with the US pulling back from the brink of armed conflict in recent days.

The United States does not want a full-blown war with Iran, although it still is seeking to build up international defenses in the region just in case of a conflict, President Donald Trump’s special envoy to the country said Thursday.

Iran is poised to surpass a key uranium stockpile threshold, threatening an accord it reached in 2015 with world powers aimed at curbing its nuclear activity. Tehran made no immediate announcement Thursday that it had done so, perhaps waiting to hear what Europe can offer at a meeting Friday to keep the deal alive.

French President Emmanuel Macron is trying to dial back tensions, saying he hopes to convince Trump to open talks with Iran and avoid a war that would engulf the Middle East. The two men are to meet at the summit on Friday.

“There is no brief war,” Macron warned. “We know when it’s starting, but not when it’s finishing.”

US Special Representative for Iran Brian Hook met with top European diplomats Thursday in Paris, and he told The Associated Press that he wants to get tougher on Iran, instead of clinging to the nuclear deal that the US pulled out of last year.

“We are not looking for any conflict in the region,” he said in an interview. But if the US is attacked, “we will respond with military force.”

Britain, France and Germany are finalising a complicated barter-type system known as INSTEX to maintain trade with Iran and avoid US sanctions, as part of efforts to keep the nuclear deal afloat.

As well as the Gulf tensions, oil markets are on edge about a looming deadline for OPEC to decide whether to extend production cuts. That could be the focus of Osaka meetings between Russian President Vladimir Putin and Saudi Crown Prince Mohammed bin Salman.

Washington and Beijing at loggerheads over tech and tariffs

Presidents Donald Trump and Xi Jinping will meet on Saturday, with each hoping to come out top in a trade and technology contest that amounts to a trade war.

The Americans want to safeguard their technological riches, restore balance to their top trading relationship and force a sharp-elbowed rival to play by the rules and keep its word.

The Chinese want the Trump administration to drop its tariffs so they can regain freer access to the world’s largest consumer market while pursuing their goal of becoming a global technology superpower.

Trump officials want China to end what they call its abusive practices, including forced technology handovers and the use of regulations to hobble American companies operating in China.

China’s reluctance to reform has cost it a key ally in the United States: American businesses. US companies, which long backed China-friendly U.S. trade policies, now largely support Trump’s combative stance, if not the tariffs he’s using as leverage.

Trump has suggested that he might be willing to use the fate of the Chinese telecommunications giant Huawei as a bargaining chip in trade talks. The US Commerce Department last month put Huawei on a blacklist, which effectively bars it from buying the US technology it needs.

“I can imagine Huawei being included in some form of a trade deal,” Trump said in May. He offered no details. But he said any arrangement “would look very good for us, I can tell you that.”

Mexico wants world to consider the challenges posed by migration

Mexican President Andres Manuel Lopez Obrador said on Thursday a letter he is sending to other leaders from the Group of 20 nations would have challenges over migration as its principal focus.

Lopez Obrador is not attending the summit, but said he would send a letter to the other leaders. Migration would be at the heart of that message, he told his regular morning news conference on Thursday.

The Mexican delegation to Osaka is due to be led by the country’s foreign minister, Marcelo Ebrard.

The latest draft of the G20 language on climate change, seen by Reuters, revives support for the 2015 Paris Agreement, calling it “irreversible”. An earlier draft had avoided that commitment at the insistence of the United States, two sources told Reuters.

President Emmanuel Macron said France would not accept a G20 communique that does not mention the Paris accord. Trump, who has called global warming a “hoax”, pulled the United States out of the pact in 2017.