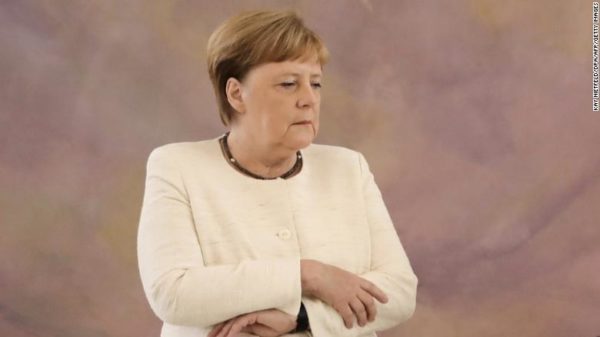 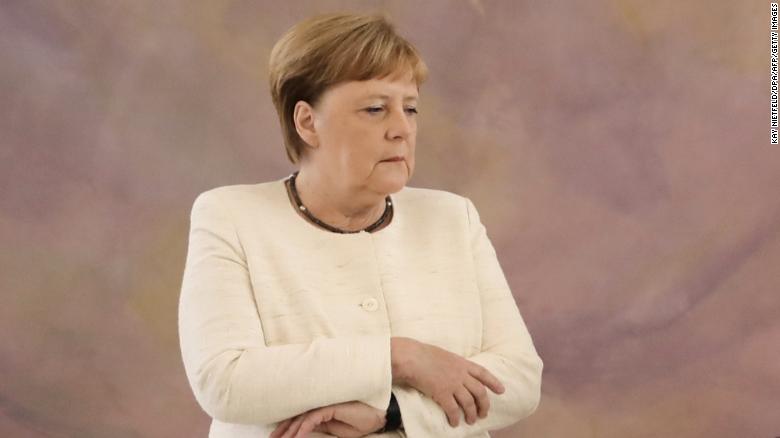 Concern is growing over the health of Angela Merkel after the German Chancellor was overcome by a shaking fit for the second time in a little over a week on Thursday.

Eight days after footage showed Ms Merkel desperately trying to maintain composure as she shook from head to foot at a reception for the Ukrainian president, she has suffered another bout of trembling.

Footage from Thursday morning shows Ms Merkel’s legs shaking as she stands through a swearing-in ceremony in Berlin for the country’s new justice minister, Christine Lambrecht.

Ms Merkel can been seen clutching her arms in an attempt to control herself while glancing uncomfortably to her side. An aide then offers her a glass of water which she turns down.

The chancellor looks wobbly throughout the entire video of roughly one minute and ten seconds, which was shared by the German Press Association.

According to journalists present at the occasion, the 64-year-old quickly regained her composure after the ceremony was over.

Ms Merkel’s office immediately moved to dampen speculation that the incident was the symptom of an underlying health problem.

“The chancellor is doing well,” spokesman Steffen Seibert said. Mr Seibert also made clear that Mrs Merkel would be flying to Japan later on Thursday to attend the G20 summit in Osaka.

Last week Mrs Merkel could be seen shaking during a ceremony to welcome President Volodymyr Zelenskiy to Berlin. The jitters led to immediate concern over the veteran chancellor’s health.

But doctors who watched the video said it looked worse than it was. Several experts dismissed concerns that a more serious illness such as Parkinson’s disease could be the cause, saying that temperatures of over 30 Celsius had likely caused her to become dehydrated.

Mrs Merkel also put her convulsions down to dehydration, saying that she had drunk too much coffee and too little water prior to the occasion.

This is not the first time that Mrs Merkel has shown external signs of suffering in extreme heat. Several newspapers have reported that during a 2017 summer visit to Mexico she began to shake on a particularly humid day.

ut on Thursday the direct heat would appear not to have been the cause. Temperatures in the German capital were under 20 Celsius when she suffered her latest incident, although on Wednesday the capital did set a new heat record for June with a temperature of 37.5 Celsius.

Bild newspaper reports that the chancellor’s timetable has been adjusted as a consequence. The tabloid claims that her plane will depart for Japan earlier than planned.

The concerns over the chancellor come as she comes under increasing pressure in German domestic politics.

Her coalition with the Social Democrats is coming under strain after the centre-Left party were soundly beaten into third place by the Greens in the European elections in May. That defeat led to the resignation of SPD leader Andrea Nahles and renewed calls from within the party to end the loveless coalition with Ms Merkel’s Christian Democrats.

Meanwhile Ms Merkel’s successor as CDU leader, Annegret Kramp-Karrenbauer, has been criticised for mistakes she made during the European election campaign. An increasing number of figures in the party are reportedly unhappy at the prospect of Ms Merkel’s chosen successor leading them into the next national election.