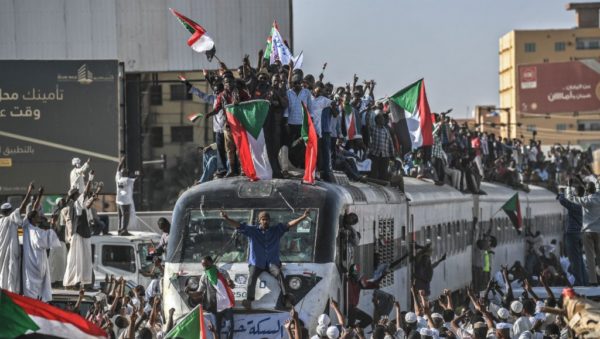 Ozan Kose, AFP | A train loaded with protesters from the town of Atbara, where Sudan’s months-long unrest began, arrives in Khartoum on April 23.
Share:

Sudanese protest leaders mounted pressure on the country’s military council on Wednesday by calling for a million-strong march for civilian rule, a day after hundreds of protesters arrived on a packed train to join their weeks-long sit-in.

“We are calling for a million [people to] march on Thursday,” said Ahmed al-Rabia, a senior leader of the Sudanese Professionals Association, the umbrella group that launched protests against deposed president Omar al-Bashir in December.

In a separate statement the SPA said the march calls for “civilian rule” in Sudan, the central demand of protesters since the army ousted Bashir on April 11. The group also threatened to launch a general strike.

Sudan’s ruling military council said Wednesday it had invited protest leaders for a meeting later in the day, saying it is willing to discuss proposals from the coalition of groups behind the demonstrations.

Protests began in the central town of Atbara on December 19 against a decision by Bashir’s government to end subsidies that led to a tripling of bread prices.

The protests swiftly mushroomed into nationwide demonstrations against his rule, leading to the seizure of power by a new military council.

But that council — led by General Abdel Fattah al-Burhan, after his predecessor lasted barely 24 hours in the post — says it has assumed power for a two-year transition period.

The protesters have therefore turned their agitation against the council, suspending talks with the army rulers on Sunday over their refusal to transfer power immediately.

Thousands have camped outside the military headquarters in central Khartoum since before Bashir was deposed, and have vowed not to leave the area until their demand has been met.

On Tuesday a train from Atbara, overflowing with flag-waving demonstrators, chugged through north Khartoum’s Bahari railway station before winding its way to the protest site.

Protesters perched on the roof of the train chanted “freedom, peace, justice” as large crowds of supporters treated them to a rapturous welcome, said FRANCE 24’s Bastein Renouil, reporting from Khartoum.

“The protesters are very welcome, because the message this sends to the army is that the whole country is mobilised to secure a change of regime,” Renouil said.

The protesters have found support in Washington, which has backed their call for civilian rule.

“We support the legitimate demand of the people of Sudan for a civilian-led government, and we are here to urge and to encourage parties to work together to advance that agenda as soon as possible,” State Department official Makila James told AFP on Tuesday.

“The people of Sudan have made their demand very clear,” she said.

“We want to support them in that as (it is) the best path forward to a society that is respectful of human rights, that respects the rule of law and that would be able to address this country’s very serious issues,” she added.

But on Tuesday several African leaders, who had gathered in Cairo at the behest of President Abdel Fattah al-Sisi, insisted on “the need for more time” for a transition, according to the Egyptian presidency.

The leaders urged the African Union to extend by three months a deadline for Sudan’s military council to hand over power to a civilian body, Egypt’s presidency said.

The AU on April 15 threatened to suspend Sudan if the military failed to transfer power within 15 days.