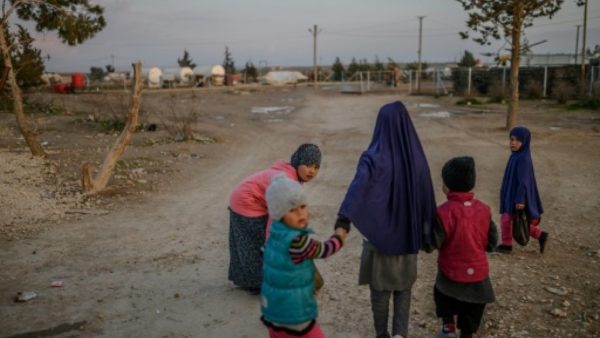 The Kurdish administration in northeast Syria said Monday it handed over three Russian orphans to a delegation from Moscow who will transfer them back home.

Kurdish foreign affairs official Abdel Karim Omar said the children, aged five to seven, are being sent back at the request of Russia.

He told AFP their parents had been affiliated with the Islamic State group, although it was not immediately clear how or when they arrived in Syria.

A member of the Russian government delegation said the siblings are from the country’s North Caucasus region. The majority-Muslim southern territory is home to most of the Russians that joined IS.

Nelly Kouskova said the children were orphaned nearly one year ago, without providing details.

Their aunt back in Russia had asked authorities to help bring them home, Kouskova told a press conference.

Since the death of their parents the children have been living in the Al-Hol camp, a Kurdish-run shelter designed to accomodate 20,000 people.

But due to the mass exodus of people fleeing the battle to oust IS from its final strip of territory — over which Kurdish-led forces claimed victory on Saturday — the numbers have swelled to 70,000.

More than 9,000 foreigners, including over 6,500 children, are being held in the overcrowded camp, the Kurdish administration said on Monday.

Syria’s Kurds have repeatedly called for the repatriation of foreign IS suspects and their relatives.

But the home countries of suspected IS members are reluctant to take them back, due to potential security risks and the likely public backlash.

Russia, however, can be seen as a pioneer in systematically returning children of suspected jihadists home.

Last month, 27 children aged four to 13 were flown from Iraq to the Moscow region. That followed the repatriation from Iraq of 30 children in late December.

Russian President Vladimir Putin in late 2017 called the drive to return the children “a very honourable and correct deed” and promised to help.

Some other foreign governments have also taken steps to bring the children of jihadists home.

France has repatriated five orphaned children of French jihadists’ from camps in northeast Syria, the government said on March 15, in the first such transfer.

Belgium has said it will help the repatriation of children younger than 10, as long as the link with one Belgian parent is proven.