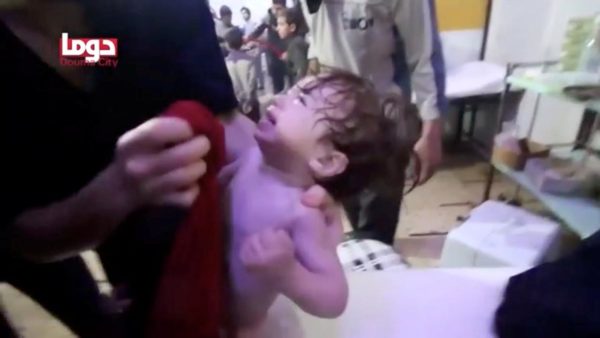 FILE PHOTO: A child cries as they have their face wiped following alleged chemical weapons attack, in what is said to be Douma, Syria in this still image from video obtained by Reuters on April 8, 2018. White Helmets/Reuters TV via REUTERS
Share:

BEIRUT (Reuters) – Syria’s foreign ministry said on Thursday it “categorically rejects” the finding of the global chemical weapons agency that a “toxic chemical” was used in an attack last April on a Syrian rebel-held town.

Inspectors from the Organisation for the Prohibition of Chemical Weapons (OPCW) said on Friday a “toxic chemical” containing chlorine was used in an attack on April 7, 2018 in the town of Douma, near the capital Damascus.

At the time Douma was held by rebels but besieged by pro-government forces. It came back under government control that month after years of siege and a devastating campaign of bombardment.

“The Syrian Arab Republic categorically rejects the conclusions of the mission team,” the foreign ministry said in a statement carried by state news agency SANA. “(The report) was no different to previous reports from the mission, which were full of blatant distortion of facts.”

The OPCW investigation did not assign blame, but the information gathered provided “reasonable grounds that the use of a toxic chemical as a weapon has taken place on 7 April 2018”.

Syria’s foreign ministry said the investigation “ignored statements from witnesses who experienced this incident and who described the claim that chemical weapons had been used in Douma as having been a play put on by armed terrorist groups.”