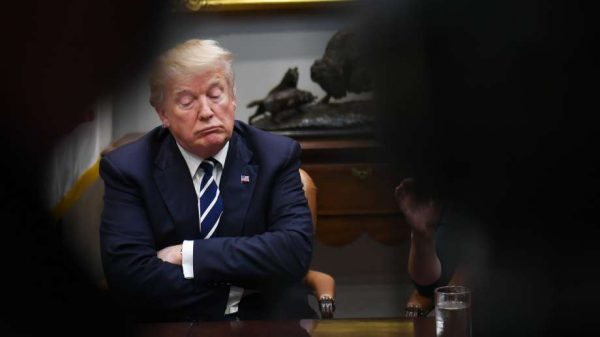 Senate Majority Leader Mitch McConnell has made it clear to President Donald Trump that he has a choice: Move ahead with his emergency declaration at the border and risk of a rebuke from his own party – or shift gears.

McConnell acknowledged Monday the Senate is likely to pass a resolution to block Trump’s emergency declaration at the southern border. Since the measure has already cleared the House, Senate passage would send it to Trump’s desk.

“I think what is clear in the Senate is there will be enough votes to pass the resolution of disapproval, which will then be vetoed by the president,” McConnell told reporters in Kentucky. “And then, in all likelihood, the veto will be upheld in the House.”

Trump has threatened to veto the resolution if it passes both chambers of Congress and lawmakers have said the emergency order’s opponents do not appear to have enough votes in either the House or the Senate to override a presidential veto.

Even so, the struggle over the emergency order would mark a turning point in Trump’s presidency. Not only would it be the first time Trump has issued a veto, it would put him at odds with members of his own party over how to deliver one of the key promises of his 2016 presidential campaign.

Republicans say that while they support Trump’s objective – building a wall along the U.S.-Mexico border – several have serious reservations about declaring a national emergency to free up billions of dollars for the structure. Some lawmakers also have raised concerns that Trump will be diverting from key military programs to fund the barrier.

Trump declared a national emergency along the border on Feb. 15 to free up money for a border wall. The decision came after Congress refused to give him the $5.7 billion he had demanded for the barrier.

Trump said he wants the wall to stop drugs and gangs from coming into the U.S., even though an analysis of data indicates the vast majority of narcotics enters through country ports of entry, not the wide swaths of border in between where additional barriers could be erected, experts say.

Sen. Rand Paul, R-Ky., was the latest GOP senator to voice objections to an emergency declaration. Paul said during a speech in Kentucky on Saturday that approving the emergency declaration would be tantamount to giving “extra-Constitutional powers to the president” – something he said he’s unwilling to do.

“I can’t vote to give the president the power to spend money that hasn’t been appropriated by Congress,” Paul said, as reported by the Bowling Green Daily News. “We may want more money for border security, but Congress didn’t authorize it. If we take away those checks and balances, it’s a dangerous thing.”

Some House Republicans made the same argument last week, when 13 of them joined all Democrats in voting to block Trump’s declaration, sending the measure to the Senate. McConnell has said the Senate will take up the measure by March 15.

Meanwhile, some GOP senators are looking to give Trump a way out.

Sen. Lamar Alexander, R-Tenn., who has called an emergency declaration “inconsistent with the U.S. Constitution,” offered an alternative last week.

Instead of declaring a national emergency, Alexander suggested Trump could secure money for his border wall by tapping into funds that Congress already approved for various programs. Not only would that give Trump access to the money he wants, it could potentially avoid months and years of litigation, Alexander said.

As the Senate vote approaches, several GOP senators said they’re still deciding how they will vote. Others support Trump, saying he’s doing what he needs to do to protect the nation’s borders.

“The president’s not exercising any power that Congress didn’t give him,” said Sen. John Kennedy, R-La. “Had Congress done its job instead of playing politics, he wouldn’t have to do it.”

Democrats, meanwhile, have complained Trump is trying to do an “end run around the Constitution.”

“This is a president who is grasping for power, and he has to be reined in,” said New Mexico Sen. Tom Udall, who serves on the Senate Appropriations Committee.

Paul’s weekend announcement that he opposes the emergency declaration makes him the fourth Senate Republican who has said they will vote to stop it. His decision gives opponents the 51 votes they need to block Trump’s declaration.

The other three Republicans who have said they will vote to stop the declaration are Thom Tillis of North Carolina, Susan Collins of Maine and Lisa Murkowski of Alaska.

“As a U.S. senator, I cannot justify providing the executive with more ways to bypass Congress,” Tillis wrote in an op-ed in The Washington Post, laying out his concerns. “As a conservative, I cannot endorse a precedent that I know future left-wing presidents will exploit to advance radical policies that will erode economic and individual freedoms.”

Tillis was elected in 2014 and is up for re-election in 2020. The nonpartisan Cook Political Report has rated the seat “likely Republican.”

Collins, who is also up for re-election next year, said she’s concerned about Trump using the declaration to repurpose billions of dollars that Congress has already appropriated.

It “strikes me as undermining the appropriations process, the will of Congress and of being of dubious constitutionality,” she said.

Collins, who is serving her fourth term, is a moderate Republican who sometimes breaks with her party on key issues, including health care. She criticized a federal judge’s ruling last December to overturn the Affordable Care Act, saying it was “too sweeping.”

She was also among the three Republicans, including the late Arizona Sen. John McCain and Lisa Murkowski of Alaska, who voted last summer against the Republican’s “skinny repeal bill,” killing the GOP health care measure.

All eyes were also on Collins last fall when the Senate voted on the controversial confirmation of U.S. Supreme Court nominee Brett Kavanaugh, who had come under fire for accusations of sexual assault committed decades ago.

Collins, who had been on the fence for months, voted for Kavanaugh, saying that voting against him without witnesses or proof could start a “dangerous” precedent.

And as recently as last week Collins was the lone Republican to oppose the nomination of Andrew Wheeler, who was narrowly confirmed as Trump’s pick to head the Environmental Protection Agency. Collins said she opposed the nomination because, as acting administrator, Wheeler supported policies that “are not in the best interest of our environment and public health, particularly given the threat of climate change to our nation.”

Murkowski said she will support the resolution to block Trump’s emergency declaration.

Murkowski, who has been in the Senate since 2002, is up for re-election in 2022. She shocked the political world in 2010 when she waged a successful write-in campaign after losing her party’s primary. Murkowski, the daughter of former Alaska governor and senator Frank Murkowski, has at other times refused to vote in lockstep with the national party that some say abandoned her during her re-election bid.

Murkowski was the only Republican to vote against Kavanaugh’s appointment. She voted “present” as a collegial gesture for her Republican colleague Sen. Steve Daines, who supported Kavanaugh but was attending his daughter’s wedding.

Murkowski has worked across the aisle on issues important to her state, including with former Democrat Sen. Mary Landrieu of Louisiana on energy policies.

Murkowski, along with Collins, also voted against the confirmation of Betsy DeVos, Trump’s choice to head the Department of Education.

Arizona’s Sen. Martha McSally, a newcomer to the chamber, also has voiced concerns about the emergency declaration.

McSally, appointed last December to fill McCain’s seat, said recently she was “seeking assurances that the money will not come from Arizona military construction projects” for her vote supporting the president.

McSally is expected to face a competitive race in the 2020 special election. The Cook Political Report rates the seat “leans Republican.” Earlier this month, Mark Kelly, a retired U.S. Navy pilot and the husband of former Rep. Gabby Giffords, announced his plans to run for the seat.

How did it fare in the House?

Despite concerns raised by some GOP lawmakers, only 13 broke ranks with the party and voted in favor of the Democratic backed resolution when it passed the House last week.

Several of them, including Reps. Will Hurd of Texas, Brian Fitzpatrick of Pennsylvania and Fred Upton of Michigan, are expected to run in competitive races in 2020.

Most Republicans voted along party lines and against the resolution, citing the need for more border security.