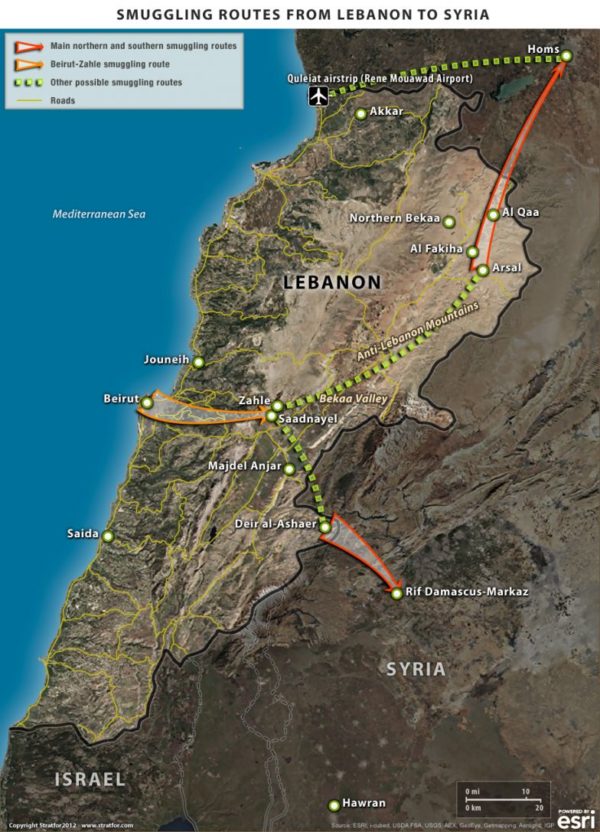 Smuggling from Lebanon to Syria has witnessed a revival in recent months as markets in Damascus are suffering from a shortage in goods.

Abou Abdo, a taxi driver who works the Damascus-Beirut route, told Asharq Al-Awsat that he has been smuggling goods to Syria for 27 years. The Syrian conflict, which erupted in 2011, has led to an increased variety in smuggled goods.

Smuggling was active between the two neighbors in the 1980s.

At the time, goods were limited to western products that were not sold in Syria, such as certain brands of shampoo, soaps and even some medicine, said Abou Ahmed, another taxi driver.

Now, the smugglers move bananas, cigarettes, fuel and gas canisters to the Syrian capital, he revealed.

During the winter, western countries imposed more sanctions against the Damascus regime, leading to a severe shortage in domestic gas and fuel and frequent power cuts. The Syrian pound also collapsed against the dollar, leaving prices to soar and the Syrians to feel the pinch of the sanctions.

A regime issued gas canister sold at 2,700 pounds, while it sold at some 10,000 pounds on the black market. The cost of transporting the canister from Lebanon to Syria, meanwhile does not cost more than 6,500 pounds.

As imports to Syria came to a near halt, traders and manufacturers in Damascus turned to smuggling from Lebanon with operations often take place along the Damascus-Beirut taxi route.

One driver, Abou Yehya, told Asharq Al-Awsat that he has been smuggling luxury biscuits, various chocolates, diapers and construction material.

The revived activity recalled the smuggling that was active during the 1980s when Damascus was under an economic boycott. Smuggled goods at the time included televisions, washing machines, fridges, stoves and carpets. The smuggling dropped as the Syrian economy witnessed a revival in the 1990s and up until the eruption of the conflict in 2011.

Abou Abdo said that the number of visitors from Syria to Lebanon “has dropped at the moment,” compared to a peak it had reached in 2012 when it appeared that the Syrian regime was on the verge of collapse.

Flights to and from Damascus also dropped during the conflict with the majority of airlines refusing to operate flights to the capital. Syrian travelers were forced to turn to Beirut’s Rafik Hariri International Airport, leading to increased taxi operations between Syria and Lebanon.

The worst part of the smuggling operations, said Abou Abdo, was the security scrutiny at border checkpoints. He revealed that each checkpoint has a “fare”. Some demand 200 pounds, others 500. Some ask for luxury cigars that cost more than 1,200 pounds.

The fare goes up if the taxi was transporting travelers from Beirut to Syria, he added.

The strange thing, he noted, was that security forces do not scrutinize the gas canisters he is carrying in his taxi.

“The regime is aware of the fuel shortage and they have been ordered to look the other way,” he said.