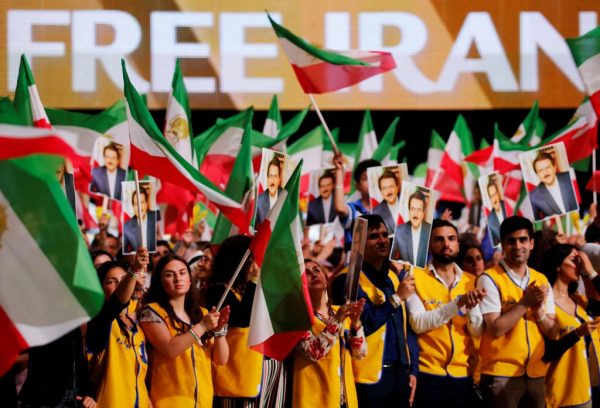 An Iranian opposition group’s rally in June. The French government said that it had foiled a bomb plot that targeted the gathering.CreditCreditRegis Duvignau/Reuters
Share:

France publicly linked Iran’s intelligence services to a foiled bomb plot that targeted a June meeting near Paris of an Iranian opposition group, and announced that it would freeze the assets of the Iranian spy ministry.

A plot of “such extreme seriousness on French territory could not be let go without a response,” France’s ministers of foreign affairs, interior and finance said in a joint statement on Tuesday.

“France has taken preventive, proportionate and targeted measures,” the ministers said. “In taking this decision France reiterates its determination to fight terrorism, especially on its own territory.”

The decision was particularly notable because it suggested that France, unlike the United States, believes that it is possible to punish Iran for hostile actions at the same time that it tries to preserve the Iran nuclear deal, which allowed the lifting of sanctions jointly applied by the European Union and the United States.

President Trump pulled out of the nuclear accord this year, pronouncing the Iranian government a rogue actor and the 2015 deal as wholly insufficient to rein in its ambitions, as well as doing nothing to halt its meddling and support of regional conflicts. In contrast, European countries are trying to find a way to avoid pulling out of the deal because they think doing so will worsen Iran’s relationship with the West.

At the same time, the decision to freeze the assets of the spy ministry seemed to be a clear sign France was angry that Iran appeared to be ignoring international norms and acting with impunity. It also indicated that, at least indirectly, France endorsed Mr. Trump’s judgment that Iran was a rogue regime.

An Iranian foreign ministry spokesman, Bahram Qasemi, denied that Iran had been involved in a bombing plot, the state news agency IRNA reported.

The assets of two of the Iranians believed to have been behind the plot have also been frozen, the French ministers said. One is a former Iranian diplomat in Vienna, Assadollah Asadi; the background of the other, Saeid Hashemi Moghadam, was not specified. But French news media reported that he was a senior official at the Iranian Intelligence and Security Ministry.

There were several people detained at the time the plot was unveiled, with the Belgium police taking the lead by arresting two Belgian-Iranian citizens, a husband and wife, who were accused of preparing to drive to France to carry out the bombing.They were found with a homemade explosive, TATP, in their car, the authorities said. Mr. Asadi was arrested by the German police, and a fourth man was detained in Paris. The sanctions announced on Tuesday did not appear to be aimed at either member of the couple or at the man arrested in France.

The foiled plot was supposed to take place on June 30 in Villepinte, a city outside Paris, where the National Council of Resistance of Iran, a Paris-based group that is dominated by the Mujahedeen el Khalq, or M.E.K., had organized a rally to promote itself as a future alternative to the Iranian government. There were 25,000 people at the event.

The M.E.K. was founded in Iran as a dissident group; it supported the overthrow of the shah and then opposed the clerical leadership led by Ayatollah Ruhollah Khomeini that took the shah’s place. It allied itself with Saddam Hussein and for many years had a base in Iraq, where it increasingly came to be viewed as marginal and akin to a cult.

Most of its members are Iranian exiles living abroad, principally in Europe and the United States. It was designated as a terrorist organization by the State Department from 1997 to 2012.

However, the M.E.K. became a popular cause for conservative American opponents of the Iranian clerical regime who share the dissidents’ opprobrium for Iran’s government. Among them is Mr. Trump’s national security adviser, John R. Bolton.

At the June rally, two close allies of Mr. Trump were present: Rudolph W. Giuliani, one of his lawyers, and Newt Gingrich, a conservative Republican politician and former speaker of the House.