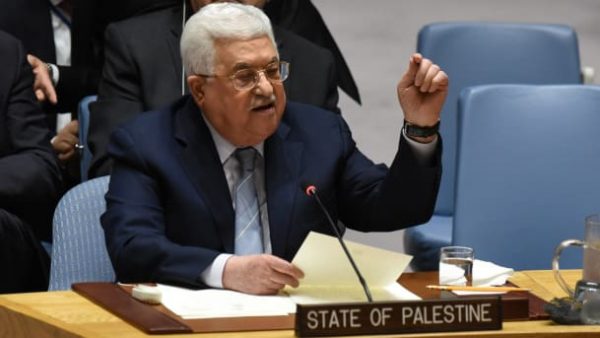 A number  of Israeli-American families have called on  Donald Trump to stop Mahmoud Abbas from entering the United States, Israel media reported on Sunday. The President of the Palestinian Authority is scheduled to attend the UN General Assembly in New York.

The media described the families as “families of American victims of Palestinian terrorism.” They have, apparently, appealed to Trump to declare Abbas persona non grata

In a letter sent to Trump, the families said that allowing Abbas to enter the US is a violation of the law and poses a threat to the American people.

Trump has taken several measures to undermine Palestinian rights since becoming US President in 2016, the foremost of which was recognising Jerusalem as the capital of the occupation state of Israel,  as well as more recently halting funding for the UN Relief and Works Agency for Palestine Refugees (UNRWA).

President Mahmoud Abbas will reportedly hold a meeting in New York on Wednesday with senior officials representing 40 countries and international organizations to discuss the ways  and means to block or influence the upcoming U.S. Middle East peace plan,  according to Isareli media reports .

This is Abbas’s most proactive diplomatic step since Trump’s Jerusalem embassy announcement, which led him to cut ties with the White House. Since then, Abbas has been campaigning against the Trump administration’s policies on the Israeli-Palestinian conflict. Abbas is trying to rally the international community against Trump and challenge the White House claims that he’s undermining a potential peace process.

According to the Israeli reports , Abbas invited to the meeting all the main countries in the world that have a role or an interest in the Israeli-Palestinian peace process.
All members of the UN Security Council except the the U.S. and Israel
The meeting will reportedly take place at the Grand Hyatt hotel, under the theme: “Salvaging the Two-State Solution, Defending the International Rules-Based System.”
According to to the reports the meeting has the following goals:

Discussing steps to defend against the threat posed to the two-state solution by the ongoing and expanding Israeli settlements.
Proactively protecting UN agencies and organizations which deal with the Israeli-Palestinian conflict, like UNRWA.
Launching a credible and effective political process that seeks to achieve the two-state solution while reaffirming the centrality of international law and UN resolutions.
The Palestinians stress that preserving the two state solution is one of the basic principles which should be supported by all those who reject Trump’s policies that undermine world order.

Israel is reportedly campaigning against the meeting  and has ordered diplomats around the world to lobby governments who were invited to the meeting not to attend or to lower their level of representation as much as possible, according to Israeli officials, but the Palestinians are sure that most countries will send senior diplomats to the meeting.