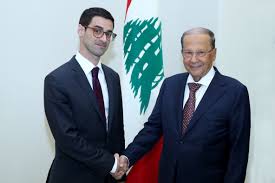 US Assistant Secretary of Defense for International Security Robert Story Karem expressed his country’s concern over Iran’s role in the region, a source following up on the official’s visit to Lebanon told Asharq Al-Awsat.

The source said Karem discussed the issue with President Michel Aoun during their meeting at the presidential palace on Thursday. They also addressed Washington’s policy towards Tehran.

In addition, they discussed the renewal of the term of the United Nations Interim Force in Lebanon (UNIFIL), an issue that does not appear to be facing any obstacles.

The peacekeeping force’s mandate expires at the end of the month.

Aoun stressed “the importance of Washington’s support to renew UNIFIL’s mandate, without any modification in its functions, numbers and budget, because this helps in maintaining stability.”

Moreover, he said that the Lebanese army was helping the international force in its tasks and coordinating with it to this end.

Karem’s meeting with Aoun was attended by US Ambassador to Lebanon Elizabeth Richard and a US delegation.

The officials appeared satisfied with the performance of the Lebanese army in the South and its cooperation with UNIFIL and the US forces that bolster its capabilities.

Aoun added: “We hope the US would adopt a policy to promote peace in the Middle East and the world because that would bring tranquility and stability to the people.”

He stressed that Beirut was committed to the implementation of UN Security Council resolution 1701 that was approved in 2006 to end the 33-day July war between the “Hezbollah” group and Israel.

He also called on Washington “to exert pressure on Israel to stop its violations of Lebanese sovereignty, especially its airspace that is subject to continuous breaches by enemy warplanes to bomb Syrian territories.”

In turn, Karem emphasized his country’s desire to strengthen relations between the Lebanese and American armies and explained his country’s position on the situation in Lebanon and the region, outlining the US administration’s adopted strategy in this area.

Karem, who is of Lebanese origin was a foreign policy legislative assistant for U.S. Senator Mitch McConnell. He was also an advisor to former Vice President Dick Cheney, specifically with respect to Middle East affairs. Karem was a member of Cheney’s national security staff from February 2005 to January 2009 and was a researcher for Cheney’s memoir.

Beginning in April 2015, Karem was a foreign policy advisor to former Florida governor  Jeb Bush during his presidential campaign.

He was also an advisor  of President Donald Trump‘s transition team.