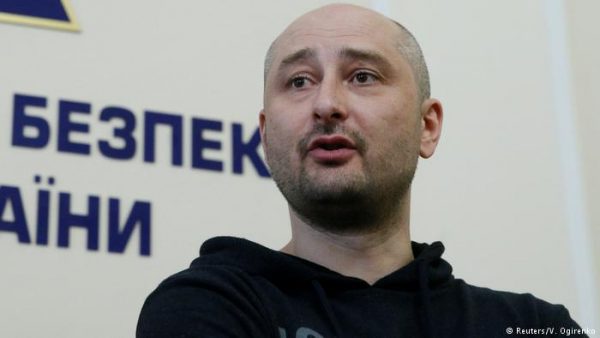 A Russian journalist and critic of the Kremlin, reported to have been shot dead in Ukraine, showed up alive at a news conference on Wednesday to declare that his murder was faked by Ukrainian security services in an effort to foil an assassination plot against him.

In a stunning development, Arkady Babchenko, 41, walked into a room of journalists in Kiev who had been expecting to get an update on his slaying.
He apologized to his wife, Olechka — who on Tuesday was reported to have found him bleeding to death at his apartment — for the “hell” she had gone through. Ukrainian officials offered a jaw-dropping explanation for his so-called death: to expose a Russian plot against him.
Two people, suspected of being the person who ordered the hit and the potential assassin, are in the custody of the security services, spokeswoman for the Ukraine Prosecutor General, Larisa Sargan, said later Wednesday.
The elaborate ruse raised many questions. Chief among them, why was it necessary to go to such extraordinary lengths to expose the plot, who was in on it, and what did Olechka Babchenko really see when she found the bleeding body of her husband?
At the news conference on Wednesday, none of these was addressed. Instead, flanked by Ukranian security officials, wearing a hoodie and occasionally flashing a sheepish smile, Babchenko launched into an explanation of the ploy.
He said Ukranian officials first told him about the threat against him, and their elaborate plan to thwart it, a month ago.

Babchenko called Russia an aggressor, and accused the country of killing children in its air support of Syrian President Bashar al-Assad’s regime.

Babchenko said he became convinced that Russian government agencies were involved in the alleged plot when he was shown his passport photo and personal documents, which he said could have been accessed by Russian special services.
“An offer was made to take part in this special operation,” Babchenko said. “I had no choice but to cooperate.”
The Security Service of Ukraine, or SBU, later revealed more details about the alleged plot. According to a statement released by the SBU, Russian special services recruited a Ukrainian citizen — identified only as “G” — who was tasked with finding, for a payment, perpetrators for a number of high-impact terrorist acts, including the assassination of Babchenko.
“He proposed to his friend, a former member of the ATO in the east of Ukraine, to execute, for $30,000, the contract kill on a Russian journalist, Arkady Babchenko. He has already transferred a deposit of $15,000,” said Vasyl Hrytsak.
According to the SBU, “G” also received a dossier on Babchenko with detailed information about his journalistic work and private life, including data on the target himself, his wife, children and parents. Information included phone numbers, bank account details and passport data, the SBU said.
“G” faces a number of accusations, including aiding in the commitment of a terrorist act and endangering the life or health of a person to violate public safety. A pretrial investigation is underway. 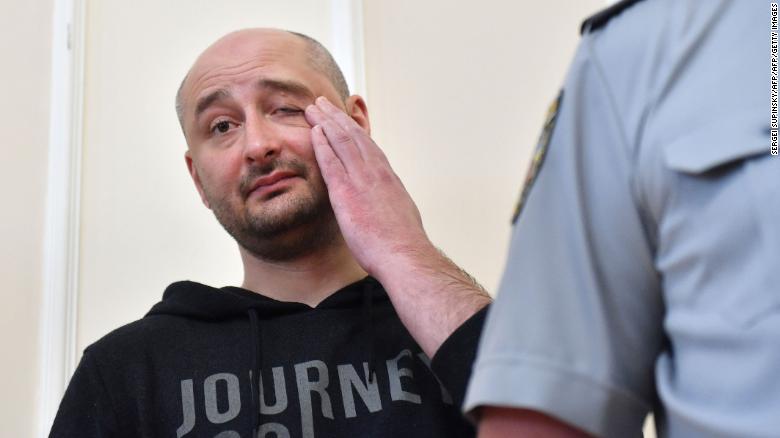 At times during the news conference, Babchenko seemed emotional.

Only a day earlier, Ukranian authorities claimed they had launched an investigation into Babchenko’s death and even released a sketch of the suspected killer.
Police claimed he was shot in the back and died in an ambulance, citing his friend and supervisor, Ayder Muzhdabaev, deputy general manager of Ukrainian TV channel ATR. Ukraine blamed Russia for his “death.”
Ukrainian President Petro Poroshenko congratulated security services on a “brilliant operation” in “saving the life” of Babchenko. On his official Twitter account, Poroshenko said Ukrainian law enforcement agencies are becoming “stronger in counteraction to Russian aggression.” He later met Babchenko, embracing the journalist, and posted footage of the encounter on Twitter.
The affair seemed unlikely to improve the frosty relations between Russia and Ukraine.
In a statement, the Russian Foreign Ministry described the operation as “obviously calculated propaganda” and “anti-Russian provocation.”
“We state that the questions of life and death in Ukraine, as well as the international community’s confidence in Ukraine’s policy, are nothing more than bargaining chips for the anti-Russian hysteria of the Kiev regime,” the statement said.
Vladimir Dzhabarov, Deputy Chairman of the International Affairs Committee of Russian Federation Council, told state media outlet RIA Novosti that Kiev is now “disgraced in the eyes of the whole world.”

‘I apologize for what you had to go through’

During the news conference Wednesday, Babchenko thanked the Ukrainian security services for saving his life. He also apologized to his wife and all those who believed he had been killed — but said the secrecy had been unavoidable.
“I would like to apologize for what you all had to go through … because I’ve buried friends and colleagues many times, and I know it’s a sickening-vomiting feeling when you have to bury your colleagues,” he said. “Also I would like to apologize to my wife for the hell she went through in those two days. Olechka, I’m sorry, but there were no options here, either.”
He described how he first claimed to have broken his leg and then was requested to “disappear somewhere” in the weeks leading up to the staged murder, in a bid to thwart the assassins.
Speaking to CNN, a journalist and colleague of Babchenko, Simon Ostrovsky, described Wednesday’s revelation as “totally shocking and unprecedented.”
“For those of us who know Arkady personally, this is something that we’re going to have to process for a little while longer,” he said.
Kateryna Lisunova, an acquaintance of Babchenko who works in New York as a special correspondent for Ukrainian television station Pryamiy, was in the ATR newsroom in Kiev to watch the news conference and posted a video on Facebook of people clapping, cheering and jumping as Babchenko appeared.
The Committee to Protect Journalists, which had earlier decried Babchenko’s “murder,” expressed relief that he was alive but demanded answers from the Ukranian authorities. “We are relieved that Arkady Babchenko is alive,” said Nina Ognianova, CPJ’s Europe and Central Asia program coordinator. “Ukrainian authorities must now disclose what necessitated the extreme measure of staging news of the Russian journalist’s murder.”

News of the apparent murder had stunned Kiev on Tuesday. Shortly after Babchenko’s death was announced, Moscow and Kiev began blaming each other for the killing of the journalist, who is a vocal critic of the Kremlin and left Russia in 2017, saying he no longer felt safe.
Ukrainian Prime Minister Volodymyr Groysman implied Russia had orchestrated the “killing” of Babchenko, while Kremlin spokesman Dmitry Peskov dismissed that idea and slammed Ukraine as an unsafe place for journalists to work.
On Wednesday Russian foreign ministry spokeswoman Maria Zakharova said the affair was a propaganda exercise by Ukraine, but that she was happy Babchenko was alive.
Babchenko left Russia after he criticized the Kremlin in a Facebook post in 2017.
He faced backlash after commenting on the crash of a Russian plane transporting the world-famous military choir Alexandrov Ensemble en route to Syria. They were traveling to perform for pilots involved in Russia’s air campaign on Aleppo.
Babchenko called Russia an aggressor, and accused the country of killing children in its air support of Syrian President Bashar al-Assad’s regime.
CNN
Share: