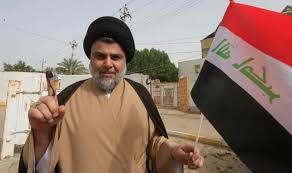 Baghdad: Already pressured by the US withdrawal from the nuclear deal, Iran faces a major test in managing Shiite cleric Moqtada Al-Sadr, an opponent who beat Tehran’s longtime allies to achieve a shock victory in Iraq’s parliamentary election.

But If Tehran overplays its hand by squeezing Sadr out of a coalition government dominated by its allies, it risks losing influence by provoking conflict between Iranian-backed Shiites and those loyal to Sadr.

Populist Sadr all but won Iraq’s parliamentary election by tapping into growing public resentment directed at Iran after what some voters say is a corrupt political elite that has failed to help the poor.

Al-Sadr block struck an alliance with the communist party and some civil Iraqi movements who joined forces in the last few years to protest corruption and lack of security in Iraq. Once the results were announced hundreds of Sadr supporters gathered and chanted slogans against corruption of Iraq’s political elite and Iran’s influence in the country.

But Iran is unlikely to relinquish influence in Iraq, its most important ally in the Middle East, and will push for a coalition that will preserve its interests.

For his part, Sadr has made clear he is unwilling to compromise with Iran by forming a coalition with its main allies, Hadi Al-Amiri, leader of the Badr militia groups, and former prime minister Nuri Al-Maliki.
After the election results were announced, he said he would only cooperate with Prime Minister Haider Al-Abadi, with the Kurds and the Sunnis.

IRAQI POLITICS
Iran has manipulated Iraqi politics in its favor in the past, notably following the 2003 US-led invasion that overthrew its enemy, Sunni dictator Saddam Hussein.
In the 2010 election, Vice President Ayad Allawi’s group won the largest number of seats, albeit with a narrow margin, but he was prevented from becoming prime minister. He blamed Tehran, for maneuvering Al-Maliki into power.