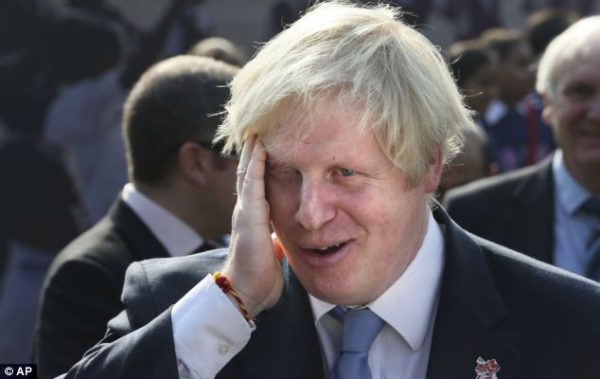 Share:
Bungling Boris Johnson was rebuked by Theresa May at last week’s Cabinet meeting after he repeatedly mixed up the Lebanon with war-torn Yemen.

The Foreign Secretary’s latest gaffe came during a discussion on the Yemen civil war, which has turned into a proxy war between Saudi Arabia and Iran.

Leading the Cabinet debate on Tuesday, Mr Johnson said: ‘We have got to do something about the Saudi war on Lebanon…’

As fellow Ministers looked at each other, wondering whether it was a slip of the tongue, he repeated the mistake.

Eventually, the Prime Minister interrupted him, saying: ‘Sorry to butt in here, but I think you mean Yemen, not Lebanon.’

Mr Johnson looked down at his notes and apologised before carrying on with his analysis of the situation in Yemen, where Saudi Arabia intervened in the civil war in March 2015.

The Riyadh regime supports Yemen’s disputed president, Abd Rabbuh Mansur Hadi, who is friendly to them, against the Houthi rebels, who say they have deposed him. The Saudi-led campaign, which is accompanied by a land, sea and air blockade, has so far led to more than 10,000 deaths and a humanitarian crisis.

Ministers were surprised that Mr Johnson could have confused Yemen with Lebanon, which is 1,400 miles away, and not involved in the conflict.
Yemen, the poorest Arab country, has been caught in the crosshairs of the long-simmering proxy power struggle between Sunni-ruled Saudi and Shia-dominated Iran, with each nation trying to influence the internal politics of the country.
The three-year war has left up to one million of Yemen’s 28 million population facing starvation.

Fighting has been deadlocked for more than a year. Iran admits backing the Houthi rebels but denies breaking a UN arms embargo by supplying them with arms.

The Yemen/Lebanon mix-up is only the latest in a long line of gaffes by the accident-prone Foreign Secretary.

Despite having a Turkish great-grandfather, Mr Johnson once penned a poem about Turkish leader Recep Tayyip Erdogan, accusing him of having ‘relations’ with a goat.

During the EU referendum campaign, he appeared to compare the EU with previous attempts to create a united Europe – including Adolf Hitler’s.

And after US President Barack Obama’s intervention in the Brexit debate, Johnson notoriously described Obama as a ‘part-Kenyan’ with an ‘ancestral dislike’ of Britain. Only last year, as Foreign Secretary, he was accused of ‘incredible insensitivity’ during a visit to Burma after reciting part of a colonial-era Rudyard Kipling poem regarded as offensive to the Burmese.

In late 2016, Boris was accused of turning up at a vital Brexit meeting chaired by Mrs May with the wrong documents.

A source said the Foreign Secretary sparked groans of disapproval at a meeting of the Cabinet’s Brexit committee because he had read the wrong briefing notes ahead of the discussion. Well-placed sources told The Mail on Sunday he arrived with papers prepared for the committee’s previous meeting on the implications of leaving the customs union.

The sources described ‘an embarrassing silence’, after which an ‘awkward-looking’ Mrs May suggested the discussion move on.