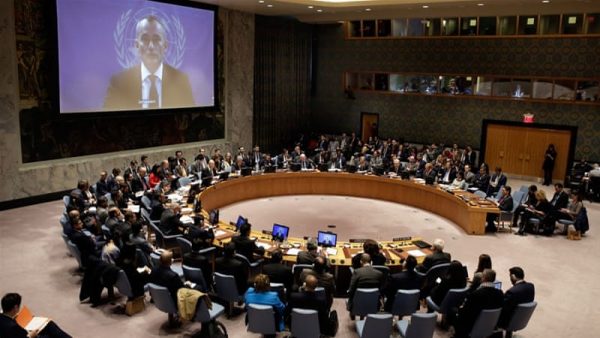 Palestine’s ambassador to the UN said Trump’s decision should disqualify the US from leading peace efforts [Richard Drew/AP Photo]
Share:

The US envoy to the United Nations, Nikki Haley, has accused the UN of damaging the prospects for peace between Israel and the Palestinians.

The organisation “has outrageously been one of the world’s foremost centres of hostility towards Israel”, she said.

Mrs Haley was addressing an emergency meeting of the Security Council called after President Donald Trump’s decision to move the US embassy to Jerusalem.

The move has been widely condemned and sparked clashes in the West Bank.

Israel has carried out air strikes against targets in Gaza, injuring a number of people, after Palestinian militants fired rockets into Israeli territory.

A Palestinian man died after Israeli troops shot at people throwing stones earlier on Friday. A second was reported to be in a critical condition.

Tensions remain high across the Middle East after Mr Trump announced the US would recognise Jerusalem as the capital of Israel, reversing decades of US neutrality on the matter.

Israel has always regarded Jerusalem as its capital, while the Palestinians claim East Jerusalem – occupied by Israel in the 1967 war – as the capital of a future Palestinian state.

Mrs Haley said the decision “recognises the obvious; that Jerusalem is the capital of Israel”.

She said the US continued to be “committed to achieving a lasting peace agreement”, and accused the UN of bias.

“Israel will never be, and never should be, bullied into an agreement by the United Nations or by any collection of countries that have proven their disregard for Israel’s security.”

The Palestinian representative, Riyad Mansour, said Mr Trump’s move meant the US could no longer be seen as a broker of peace.

“Complicity must be recognised,” he said.

Israel’s representative, Danny Danon, thanked the US for what he called “a milestone for Israel, for peace, and for the world”.

During an emergency meeting, UN Security Council members widely condemned Donald Trump’s decision to recognise Jerusalem as the capital of Israel, a move that has led to deadly clashes across the occupied Palestinian territories.

Eight countries called for the emergency meeting at the UN headquarters in New York on Friday, as Palestinians protested across the occupied West Bank, Jerusalem and Gaza Strip against the US president’s decision throughout the day.

Several countries resoundly condemned the unilateral move by the US to recognise Jerusalem as Israel’s capital.

Trump, ignoring warnings from the international community, announced on Wednesday that the US was formally recognising Jerusalem as the Israeli capital and would begin the process of moving its embassy from Tel Aviv to the city.

Palestinians want East Jerusalem as the capital of a future state, while Israel says Jerusalem, which is under Israeli occupation, cannot be divided.

The international community has never recognised Israel’s claim to the entire city.

Where has there been violence?

In the West Bank, Israeli forces clashed with Palestinians in the cities of Bethlehem, Ramallah, Hebron and Nablus, as well as smaller locations.

At least 217 Palestinians were wounded in confrontations in the West Bank and East Jerusalem, Palestinian medics said.

Why does Trump’s announcement matter?

Jerusalem is of huge importance to both Israel and the Palestinians. It contains sites sacred to the three major monotheistic faiths – Judaism, Islam and Christianity.

Israel occupied the eastern sector – previously occupied by Jordan – in 1967, and annexed it in 1980, but the move has never been recognised internationally.

Some 330,000 Palestinians live in East Jerusalem, along with about 200,000 Israeli Jews in a dozen settlements there. The settlements are considered illegal under international law, though Israel does not regard them as settlements but legitimate neighbourhoods.

According to the 1993 Israel-Palestinian peace accords, the final status of Jerusalem is meant to be discussed in the latter stages of peace talks.

The last round of talks between Israel and the Palestinians broke down in 2014 and while the US is formulating fresh proposals, Palestinian officials have said Mr Trump’s announcement has disqualified the US from brokering future negotiations.