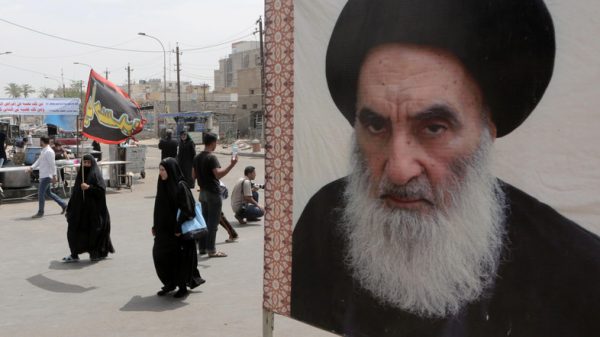 Shiite pilgrims make their way to the shrine of Imam Moussa al-Kadhim as passing by a poster of Shiite spiritual leader Grand Ayatollah Ali al-Sistani, right, in Baghdad, Iraq, Thursday, May 22, 2014. Shiite pilgrims are expected to converge on the shrine in northern Baghdad during their annual march to commemorate the eighth-century death of Imam Moussa al-Kadhim, a key Shiite saint. (AP Photo/Khalid Mohammed)
Share:

Iraqi sources revealed that the   highest Shiite Muslim religious authority in the country, Grand Ayatollah  Ali al-Sistani  refused to receive the Chairman of the Iranian Expediency Council Mahmoud Hashemi Shahroudi who was sent by the Supreme Leader Ali Khamenei in order to visit Iraq and meet with its officials, after escalations of differences among the pro-Tehran Shiite alliance.

Shahroudi asked to meet Al-Sistani during his visit to Najaf, which lasted for two or three days, as part of his tour inside Iraq, but Sistani refused to meet with him,” Al-Ghad Press in Baghdad reported.

The sources did not reveal why Sistani refused to receive Shahroudi, according to the site.

Iranian sources have revealed that Khamenei asked Shahroudi to visit Iraq to unite the Shiite parties after the growing differences between them in preparation for joining, with a single list in the upcoming parliamentary elections.

Differences between the Shiite alliance

Shahroudi’s visit to Iraq comes amid escalating differences between the Shiite alliance to nominate a new candidate, replacing Ammar al-Hakim, who split from the Supreme Council on July 24, founded the National Wisdom movement (Al-Hikmah).  Al-Hakim also received Shahroudi in Baghdad.

Iran’s supreme leader Ali Khamenei issued a decree on August 14 appointing Shahroudi, as chairman of the Expediency Council instead of his late president Akbar Hashemi Rafsanjani, for five years.

Some groups in Iran oppose his candidacy to succeed “Al Murshid” because of his Iraqi nationality, despite the support he is getting from Khamenei and senior leaders of the Iranian regime.

But Shahroudi’s supporters say Iraq did not make him lose his Iranian citizenship although he was born in the Iraqi city of Najaf, where his father was a teacher in the Shi’ite Hawza.

Indicating just how serious the various arguments between the different Shiite Muslim movements are, several other Shiite Muslim leaders refused to meet with Shahroudi. Muqtada al-Sadr, who heads the Sadrist movement a   key Shiite leaders , who   is both political and military – refused to meet with Shahroudi as did four senior clerics in Najaf, closely associated with the  Al- Sistani.

Al-Sistani believes that while religion should play a major part in Iraq’s governance, that it should not interfere too heavily in politics. Iran’s Khamenei holds a very different point of view. The last senior politician to meet with Shahroudi in Iraq during this visit was the country’s current prime minister, Haidar al-Abadi.

“Shahroudi’s visit to Iraq is part of recent Iranian efforts to bring about rapprochement between different, rival Shiite Muslim parties in Iraq,” says one official from a Shiite Muslim party, who did not wish to be named because of the sensitivities of the subject. “There have been a number of these kinds of visits from Iranians, and Iraqis have gone to Tehran for the same reason.”

Apparently during his various meeting Shahroudi said he understood that the different Shiite parties had their differences but that it would be better if they all stuck together, especially with elections coming up in Iraq.

“Iran’s main goal is to keep the prime minister’s seat for the Shiite Muslim parties,” the official told NIQASH.