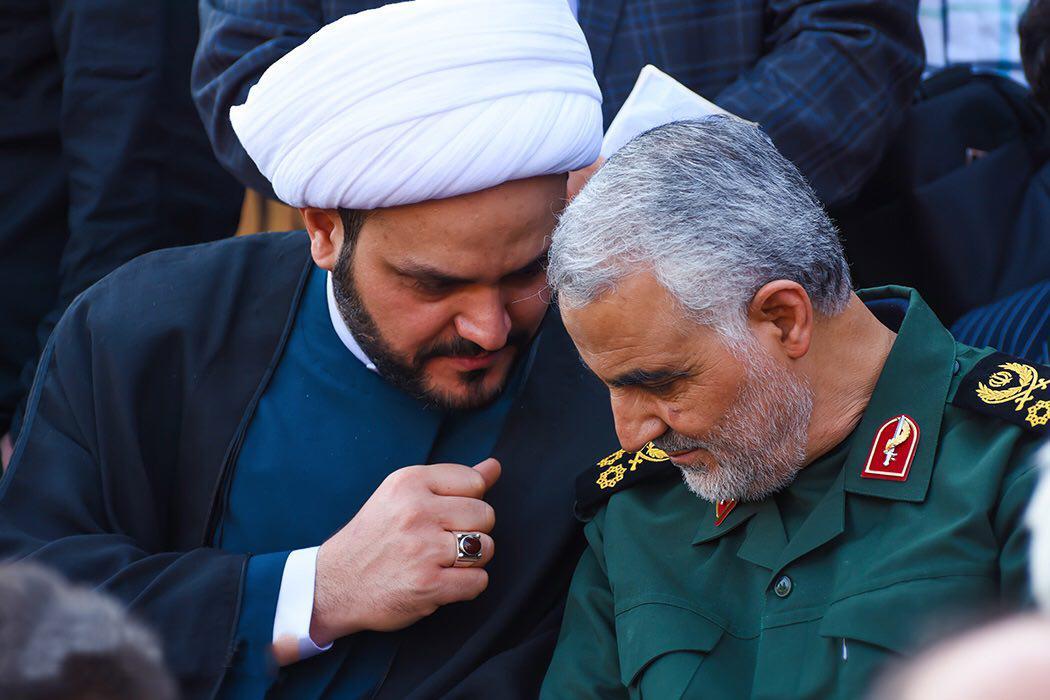 Akram Kaabi Kaabi, who heads a Shi‘ite Muslim militia named Harakat Hezbollah al Nujaba is shown with Iranian Revolutionary Guard Commander General Qassem Suleimani “Suleimani , the head of the Qods Force, the foreign arm of Iran’s Revolutionary Guards Corps has been described by the intelligence community as the “most powerful operative in the Middle East today and the sole Iranian authority on Iraq.” He has been organizing Iraqi forces and have become the de facto leader of Shiite militias throughout the Middle East.
Share:

In late May, an Iraqi cleric called Akram Kaabi visited militia fighters in a desolate Iraqi town near the Syrian border. Kaabi, who heads a Shi‘ite Muslim militia named Harakat Hezbollah al Nujaba, was decked out in a camouflage uniform and led the fighters in prayer on mats laid on the dusty ground. A video of the session showed heavily armed militiamen standing guard.

The event took place in Qayrawan, a town the Nujaba militia had seized back from Islamic State, the radical Sunni Muslim group. Nujaba, whose name means ‘the Virtuous,’ have also fought across the border in Syria, where they have lent support to President Bashar al-Assad in the fight against Islamic State and others.

The Nujaba group, which has about 10,000 fighters, is now one of the most important militias in Iraq. Though made up of Iraqis, it is loyal to Iran and is helping Tehran create a supply route through Iraq to Damascus, according to Iraqi lawmaker Shakhwan Abdullah, retired Lebanese general Elias Farhat, and other current and former officials in Iraq. The route will run through a string of small cities including Qayrawan. To open it up, Iranian-backed militias are pushing into southeast Syria near the border with Iraq, where U.S. forces are based.

The Nujaba militia is one example of the way Iran is seeking to expand its Shi‘ite influence in Iraq and across the wider region. In the 1980s, Shi‘ite-dominated Iran was at war with Iraq, where Sunni Muslims held power despite being a minority of the population. But after the fall of Saddam Hussein, the Shi‘ite majority in Iraq took control of the government.

Since then, ties between the Shi‘ite-led governments in Tehran and Baghdad have become stronger, and Iran has acquired growing influence in Iraq. Iranian money and religious backing are now key to the Iraqi government’s power.

Kaabi has repeatedly said that Nujaba is allied with Iran. Last autumn, he said his group follows “Velayat-e Faqih,” or Guardianship of the Jurist, the ideological cornerstone of Iran’s theocratic system of government, according to the Iranian Tasnim news agency.

“If Iran can open this road they will have access through Iraq and Syria all the way to Hezbollah in Lebanon,” said Farhat, the retired Lebanese army general.

Iran, which backs Syria’s Assad, has stated that it wants to see its influence extend through Iraq to its allies in Damascus and beyond to Hezbollah, a Shi‘ite militant group in Lebanon it has long supported.

A security adviser who works with a number of governments in the Middle East said Iran needs road access to Damascus to supply the conflict in Syria. “There is a very high cost for air transport for the militias. Troops and small supplies are easy to transport but it’s hard to load heavy weapons on airplanes,” said the adviser, who asked not to be identified because of the sensitivity of the subject.

“The goal is to open a road on both sides for logistics … They want to bring in artillery, rockets and heavy equipment like bulldozers,” the adviser said.

In Iraq, the Nujaba fights under the umbrella of the Popular Mobilization Forces (PMF), which encompass tens of thousands of Shi‘ite militiamen. Last year Iraq’s parliament passed a law that put these fighters under the control of the Iraqi government. But current and former officials in Iraq and militia members say many of the militias have been armed and trained by Iran’s Revolutionary Guards.

A representative at an Iranian Revolutionary Guards office in Tehran declined to comment on the Nujaba militia.

Iraqi Prime Minister Haider al-Abadi and other senior Iraqi officials have not spoken out in public about Nujaba or the new road. But some players within Iraq’s governing coalition want to distance Iraq from Iran.

Ayad Allawi, a vice president, is Shi‘ite, but he has a nationalist outlook and wants to prevent the conflict in Syria from spilling over further into Iraq. He said in an interview: “The government of Iraq should prevent them (Shi‘ite militias) from going to Syria. We are not supposed to supply fighting people to support a dictatorship in Syria.”

Asked to comment on Iran-backed militias moving into southeast Syria near where American forces are based, U.S. Army Colonel Ryan Dillon, a spokesman for the U.S.-led coalition fighting Islamic State, said: “The Coalition reserves the right to protect itself and its vetted Syrian partners against any threat.”

The current route that Iran is pushing to open through Iraq was not its first choice. Soon after Iran became involved in the Syria conflict in 2011, the Iranians attempted to open a logistical supply line through the Kurdish region of northern Iraq to Syria, lawmaker Abdullah, who is a member of the Iraqi parliament’s security and defense committee, told Reuters. But Massoud Barzani, the president of the Kurdistan region of Iraq, resisted the move, said Abdullah, who is a member of Barzani’s Kurdistan Democratic Party (KDP).

The new route bypasses the Kurdish region but could still destabilize the country, according to Abdullah.

The United States has long held that Kaabi was fighting for Iran even before he became leader of the Nujaba. In 2008, when Kaabi was involved with another militia, the U.S. Treasury designated him an individual who threatened the peace and stability of Iraq. The United States blocked any assets Kaabi may have had under U.S. jurisdiction and prohibited U.S. citizens from dealing with him.

Kaabi later formed his own militia, and during the Syria conflict Nujaba gelled as a fighting force. The group initially marshaled fighters in 2013 to defend Sayeda Zeinab, a shrine south of Damascus that is revered by Shi‘ites. Nujaba was then drawn deep into the conflict against Islamic State, also known by the Arabic acronym Daesh.

“Daesh became an opportunity for many of these people. When Daesh came, they became needed,” said an Iraqi former senior government official. “They flourished and expanded the group: more arms, more money, more people. The money was coming from Iran.”

Hashim al-Moussawi, spokesman for Nujaba, said: “We couldn’t find any support for Iraq from America or Arab or Islamic countries, except Iran. Iran supported Iraq with arms and advisers.”

Some members of the Nujaba militia fight because of their strong religious beliefs, but many are poor Shi‘ites from the southern region of Iraq tempted by payments of up to $1,500 per month from Iran, according to the security adviser.

The Iranian Revolutionary Guards representative said Iran’s link with the Nujaba was not an issue he could discuss.

Those Nujaba fighters who have training are sent to Damascus on direct flights from Baghdad or Najaf, according to the security adviser. Others head for three-month training courses in southern Iraq which focus on the use of heavy machine guns, rocket-propelled grenades and sniper rifles.

Some train with Hezbollah in Lebanon and then cross by land into Syria, according to the security adviser; in Iran there is specialized training in de-mining, communication and operating drones. Kaabi has said that the group has Yasir drones, an Iranian copy of the Boeing ScanEagle, used for reconnaissance.

The Nujaba spokesman declined to comment on training, saying it was a confidential military issue.

In 2014, the Nujaba released a song dedicated to Qassem Soleimani, the head of the Iranian Revolutionary Guards’ Quds Force, the branch of the group that oversees operations outside Iran’s borders. The video praises Soleimani for fighting the American military and Islamic State, and is interspersed with images of Nujaba fighters firing machine guns.

Photos and videos posted on hardline Iranian news sites and Nujaba’s website show Soleimani and Kaabi at what the websites say are frontline positions in Syria. Reuters was unable to confirm the locations.

The Nujaba spokesman said around 500 Nujaba fighters have been killed in combat between Syria and Iraq. The war dead are memorialized in online postings, and last April the militia group posted a large billboard praising its martyrs near the gate of Baghdad University.

After Nujaba’s efforts in Aleppo, Kaabi was invited for a high-profile visit to Iran. He was interviewed on prime-time TV and met with top officials including parliament speaker Ali Larijani and former Revolutionary Guards commander Mohsen Rezaie. He also met Iran’s Supreme Leader Ayatollah Khamenei in a separate visit.

The group is already looking beyond the conflicts in Syria and Iraq. In March, it announced the formation of a “Golan” brigade to push Israel out of the Golan Heights, which Israel has occupied since 1981.

The move “sharpens the threat posed by the presence of Iran and Hezbollah in Syria in general, and on the Syrian side of the Golan Heights in particular,” Israeli intelligence minister Israel Katz told the Jerusalem Post after the announcement.

A key question for both Iraq and Syria is what happens with the Nujaba and similar Shi‘ite militia groups if, as seems likely, Islamic State is pushed out of both countries.

Iran’s Khamenei said in late June that no attempts should be made to weaken Iraq’s Popular Mobilization Forces. “The objection of the Americans to (the PMF) is that they want Iraq to lose an important component of its power,” Khamenei said in a meeting with Iraqi Prime Minister Haidar al Abadi in Tehran, according to a report posted on Khamenei’s official website. “Don’t trust the Americans under any circumstances.”

Tensions between Iran and the United States are reflected in confrontations between U.S. forces and Iranian-backed militias in the border areas of Syria and Iraq. In mid-May, the United States bombed a convoy of what it said were pro-Syrian government fighters moving near a U.S. base in al Tanf in southern Syria. Iranian news and militia websites reported Shi‘ite militia fighters allied with Iran moved into the area at the time.

The United States targeted forces in the same area twice more in June and also downed an armed drone in southeast Syria. The drone was most likely made by Iran, a U.S. official said. It fired on Syrian forces being trained by the United States.

In mid-June, Nujaba fighters deployed in southeast Syria with trucks armed with heavy machine guns, according to reports on the Nujaba site and Iranian news sites. The group posted photographs online of their convoys on highways near the Iraqi border.

“The Americans and Shi‘ite fighters are within artillery range of each other now in Syria,” the international security adviser said.

As Iran’s goal of forging a land route through Iraq to Syria edges nearer, Shi‘ite allies are showing new assertiveness. In early August Kaabi sent a letter, published on Nujaba’s website, to the leader of Hezbollah in Lebanon, expressing pan-Shi‘ite solidarity.

“Our fate and future are the same,” Kaabi said, declaring that they were waging the same war but on “different battlefields.” He added: “We announce our complete solidarity and support with your loud cry against the oppressive Zionist regime.”