“I regret that our efforts were simply not enough, this time,” Senate Majority Leader Mitch McConnell said on the Senate floor after the vote. “This is clearly a disappointing moment.”

“It’s time to move on,” he added after pulling the bill from the floor.

The decision by McCain to vote no came after weeks of brinkmanship and after his dramatic return from cancer treatment to cast the 50th vote to start debate on the bill earlier this week. The GOP’s “skinny” repeal bill was defeated 49-51, falling just short of the 50 votes needed to advance it. Republicans Susan Collins of Maine and Lisa Murkowski of Alaska also voted against it.

It wasn’t immediately clear what the next steps would be for the Republicans. The repeal effort had appeared to collapse several times before, only to be revived. And several Republicans pleaded for their colleagues not to give up, even as President Donald Trump blasted the vote.

3 Republicans and 48 Democrats let the American people down. As I said from the beginning, let ObamaCare implode, then deal. Watch!

“3 Republicans and 48 Democrats let the American people down, As I said from the beginning, let ObamaCare implode, then deal. Watch!” he wrote on Twitter at 2:25 am Washington time.

House Speaker Paul Ryan of Wisconsin said in a statement Friday he is “disappointed and frustrated” that the Senate couldn’t reach an agreement, but he urged the Senate to keep trying. “We should not give up,” he said.

Collins said in a statement the Senate should work on a plan “in a very careful way. That means going through the process of committee hearings; receiving input from expert witnesses” and working with lawmakers in both parties. Both the House and Senate proposals were crafted in secret, with no public hearings or input from Democrats.

House Freedom Caucus Chairman Mark Meadows insisted, though, that he had no intention of working with Democrats, saying the GOP-only path remains the only viable option. “In the end, we will prevail,” the North Carolina Republican said.

McConnell has struggled to find a compromise that satisfies conservatives, who have demanded a wholesale repeal of Obamacare, and moderates, who have been unnerved by predictions the bill would significantly boost the ranks of uninsured Americans.

Democrats immediately called for a bipartisan debate on how to fix Obamacare.

“We are not celebrating. We’re relieved,” Senate Minority Leader Chuck Schumer of New York said after the vote. “Let’s turn the page and work together to improve our health care system.” He also said Democrats would be willing to help expedite bipartisan legislation and to advance Trump administration nominations.

Republicans have been under intense pressure to deliver on their repeal promises. But repeated pleas — and threats — from the White House and conservative groups weren’t enough to push the bill through.

“I sadly feel a great many Americans will feel betrayed, that they were lied to, and that sentiment will not be unjustified. You cannot campaign against Obamacare and then vote for Obamacare,” Republican Senator Ted Cruz of Texas said early Friday.

In a dramatic vote in the early morning hours on Friday, Collins voted no first, then Murkowski, followed by McCain, who came to the well of the Senate and gave a thumbs down, dooming the repeal bill to loud gasps, mostly from the Democratic side of the aisle. Republican leaders stood together looking grim as their back-up repeal plan appeared to collapse.

Of the three, Collins had been opposed to every GOP proposal on the table. Murkowski had also been critical of them, even after Interior Secretary Ryan Zinke called her and fellow Alaska Republican Senator Dan Sullivan and threatened them with retributionon major energy and public-lands decisions if they voted against repeal.

McCain was a bigger surprise. He has long called for repeal, but grew frustrated over the secretive process that GOP leaders employed to draft various repeal measures. When he returned this week, he made an impassioned speech on the Senate floor for bipartisanship, making it clear he was prepared to vote against the legislation if it didn’t satisfy his concerns.

“We must now return to the correct way of legislating and send the bill back to committee, hold hearings, receive input from both sides of aisle, heed the recommendations of nation’s governors, and produce a bill that finally delivers affordable health care for the American people,” McCain said in a statement after the vote. “We must do the hard work our citizens expect of us and deserve.”

On Thursday evening, several Republicans were making the unusual argument that they would only vote to advance the measure if they got guarantees it wouldn’t pass the House. House Speaker Paul Ryan assured several senators that his chamber would start a conference negotiation if the Senate passed the bill.

McConnell released the long-awaited text of his so-called skinny repeal bill late Thursday, only a few hours before the pivotal vote. It would end the requirement that individuals buy health insurance, and suspend through 2026 the requirement that companies provide it for their workers.

It would also extend a moratorium on the tax on medical-device makers through 2020 and increase the amount that individuals can contribute to health-savings accounts. The measure would also defund Planned Parenthood for one year.

The Congressional Budget Office said late Thursday that the bill would result in an additional 15 million Americans without health insurance next year. It also said the measure would reduce the federal deficit by $178.8 billion over a decade. 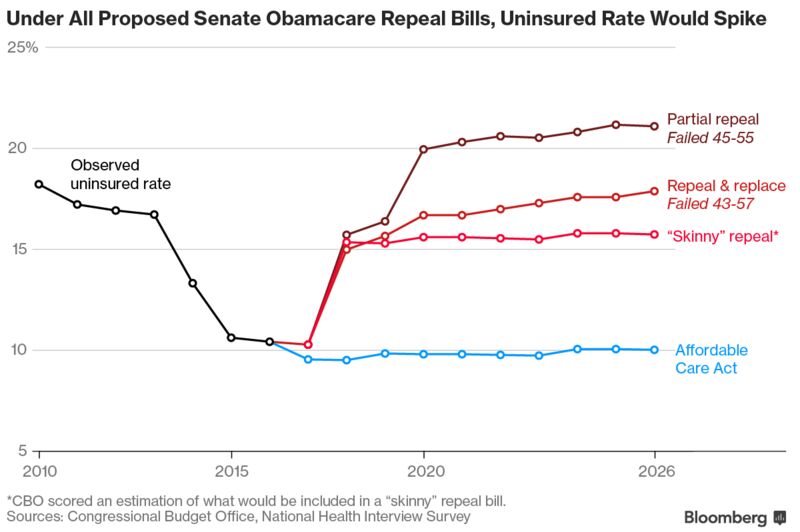 The defeat of the “skinny” repeal bill came after several other measures put forward by GOP leaders were also blocked.

The Senate rejected a fuller repeal of Obamacare 45-55 Wednesday. Seven Republicans voted against it, including Senate Health Chairman Lamar Alexander of Tennessee and McCain. Late Tuesday, a 43-57 Senate vote swept aside a revised version of McConnell’s Obamacare replacement, a measure negotiated in secret during weeks of tense GOP talks.

Republicans had said late Thursday their plan was to get the “skinny” bill through the Senate and then negotiate with the House on a broader agreement to repeal and replace Obamacare.

“Passing this legislation will allow us to work with our colleagues in the House toward a final bill that can go to the president, repeal Obamacare, and undo its damage,” McConnell said Thursday night on the Senate floor. “I urge everyone to support it.”

By early Friday morning, McConnell admitted defeat, saying his “only regret” is that they failed.

Several Senate Republicans said they hoped this wasn’t the end of the debate.

“I am disappointed with this setback on efforts to fix our broken health care system,” Republican Senator Pat Toomey of Pennsylvania said in a statement. “Congress must not give up on repealing and replacing the failed health care law.”

A crestfallen Bill Cassidy said he hopes Democrats are now interested in working on a broader deal, like the one he developed with Collins.

“I’ve tried in the past, as has Susan, to have a dialogue. It hasn’t worked. Maybe this had to happen to begin to have a conversation,” the Louisiana Republican said.