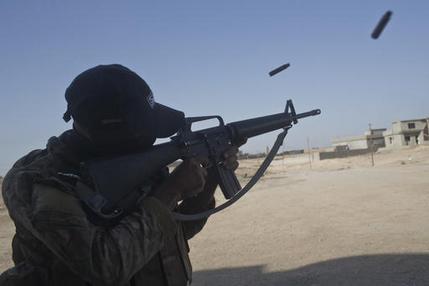 An Iraqi army soldier fires his rifle in the town of Shura, some 30 kilometers south of Mosul, Iraq, Saturday, Oct. 29, 2016. Iraqi troops approaching Mosul from the south advanced into Shura on Saturday after a wave of US led airstrikes and artillery shelling against Islamic State positions inside town. (AP Photo/Marko Drobnjakovic)
Share:
The Latest on developments in Iraq, where the offensive to take the city of Mosul from the Islamic State group is now in its third week (all times local):

He says, “we will close in on Daesh from all angles and God willing, we will cut the snake’s head.” He used the Arabic acronym for the group. He spoke from the town of Shura, south of Mosul, where he was visiting troops on Monday.

Al-Abadi says IS “will have no way out, and no way to escape,” urging the fighters to give up as the Iraqi military stands poised to enter the city. He adds that “either they die, or surrender.”

The Iraqi military says its troops have taken control of the last village to the east of the Islamic State-held city of Mosul.

Fadhil says his forces had destroyed three suicide car bombers who had attempted to attack them during the day, adding that the troops plan to enter the city “soon” and liberate it.

For two weeks, Iraqi forces and their Kurdish allies, Sunni tribesmen and Shiite militias have been converging on Mosul from multiple directions to drive IS from Iraq’s second largest city.

An Iraqi officer in Bazwaya, the last village east of Mosul, says residents have hung up white flags on buildings and from windows in a sign they would not resist special forces troops entering to drive out Islamic State fighters.

Maj. Salam al-Obeidi says troops are asking the villagers to stay inside their homes as the Iraqi forces move through the streets. It’s a precaution against potential suicide bombers, a common IS tactic.

Meanwhile, Iraqi Prime Minister Haider al-Abadi announced on his website that he would be visiting troops near the front line.

Iraqi special forces have entered the last village to the east of Mosul’s city limits, clearing a path toward the city that was followed by army units.

Armored vehicles, including Abrams tanks, drew mortar and small arms fire as they moved on the village of Bazwaya in the dawn assault on Monday, while allied artillery and airstrikes hit IS positions.

The army says its ninth division had moved up toward Mosul and was now approximately three miles from its eastern outskirts.

At one point, a Humvee packed with explosives raced ahead in attempt to ram the forces, but Iraqi troops opened fire on it, setting off the charge and blowing up the vehicle. Plumes of smoke rose in the air from IS positions hit by artillery and airstrikes.

State television described the operation as a “battle of honor” to liberate the city, which was captured by IS in 2014. It said troops were advancing on the city from three axes.

Iraqi special forces are advancing on the Islamic State-held city of Mosul from the east under heavy fire, inching closer to the city’s limits.

Brig. Gen. Haider Fadhil says car bombers are trying to stop the advance, but that his troops aim to enter Mosul’s eastern outskirts today and that they’re just 3 kilometers (2 miles) from that position now.

The Monday dawn assault saw armored vehicles, including Abrams tanks, move on the suburb of Bazwaya as allied artillery and airstrikes hit IS positions, drawing mortar and small arms fire.

For two weeks, Iraqi forces and their Kurdish allies, Sunni tribesmen and Shiite militias have been converging on Mosul from all directions to drive IS from Iraq’s second largest city.

The operation is expected to take weeks, if not months.