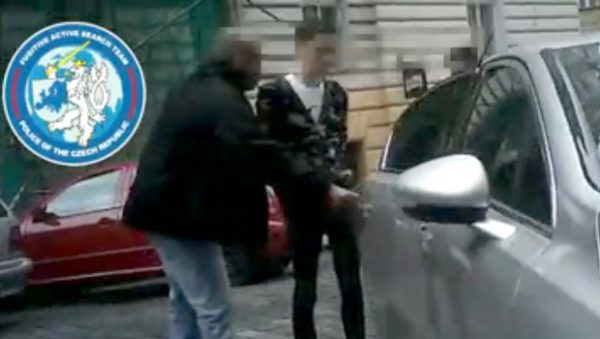 A screengrab from video released by Czech police shows a man identified only as a Russian hacking suspect being taken into custody at a restaurant, Oct. 18, 2016, in Prague.
Share:
By HANA de GOEIJ

A man identified as a Russian hacker suspected of pursuing targets in the United States has been arrested in the Czech Republic, the police announced Tuesday evening.

The suspect, who was captured in a raid at a hotel in central Prague, did not resist arrest, but he had medical problems and was briefly hospitalized, the police said in a statement.

David Schön, a police spokesman, said on Wednesday that the man, whose name has not been released, was arrested on Oct. 5. “We postponed the announcement for tactical reasons,” he said.

The statement said that “the man was a Russian citizen suspected of hacking attacks on targets in the United States,” and that the raid was conducted in collaboration with the F.B.I. after Interpol issued an arrest warrant for him.

A judge in Prague has ordered the man to remain in custody, and a court will examine whether to extradite him to the United States. Neither the Czech authorities nor the F.B.I. would supply further details.

The arrest came two days before the Obama administration formally accused the Russian government of stealing and disclosing emails from the Democratic National Committee and other institutions and prominent individuals.

The United States director of national intelligence, James R. Clapper Jr., said in a statement on Oct. 7 that high-level Russian officials were trying to interfere with American elections.

“The recent disclosures of alleged hacked emails on sites like DCLeaks.comand WikiLeaks and by the Guccifer 2.0 online persona are consistent with the methods and motivations of Russian-directed efforts,” Mr. Clapper said. “These thefts and disclosures are intended to interfere with the U.S. election process.”

Mr. Clapper said that “such activity is not new to Moscow,” and he accused Russia of using similar tactics across Europe to influence public opinion.

“We believe, based on the scope and sensitivity of these efforts,” he said, “that only Russia’s senior-most officials could have authorized these activities.”

The anti-secrecy organizations DCLeaks and WikiLeaks have been involved with the disclosures of illegally obtained emails from the hacked accounts of prominent figures including Colin L. Powell, the former secretary of state, and John D. Podesta, the chairman of Hillary Clinton’s presidential campaign.

Guccifer 2.0 is the assumed name of a Romanian “lone hacker” responsible for copying thousands of emails and other files from the Democratic National Committee, but experts are not certain if the hacker is a person or a front created by Russian intelligence officials.

It is not clear whether the arrest in Prague is related to the hackers Mr. Clapper described.