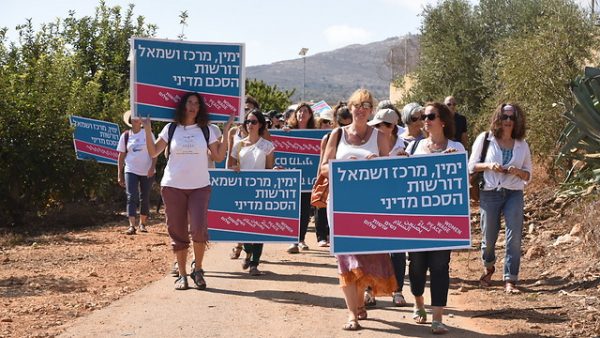 About  2,000 women convened at Israel’s Lebanese border  earlier this month  in the first leg of a cross-country march aimed at pressuring the nation’s leaders to resume peace talks with the Palestinians, Israeli daily Haaretz  reported .
The event was  reportedly launched by Women Wage Peace, a non-partisan organization founded two years ago, following Israel’s last war in Gaza.
Just as the Israeli political activists began their journey by foot from Rosh Hanikra to Jerusalem, another international women’s group, by mere coincidence, was heading toward Israel’s coastal waters bearing a political message of its own: end the blockade of Gaza. The Women’s Boat to Gaza, an initiative of the International Freedom Flotilla Coalition, which had set out from Barcelona, was intercepted offshore by the Israeli navy on Wednesday afternoon.

Titled “March of Hope,” the Women Wage Peace event will span two weeks, culminating on October 19 with a mass rally in Jerusalem outside Prime Minister Benjamin Netanyahu’s residence. “We expect tens of thousands at the Jerusalem rally,” said Lili Weisberger, an activist in Women Wage Peace and organizer of the march.
Roughly 1,000 Palestinian women from the West Bank, along with thousands of Israeli women, she said, had signed up for a special “mothers” prayer service scheduled for the morning of the Jerusalem rally at Qasr el Yahud, the West Bank site where Jesus is believed to have been baptized. Jordanian women were also expected to participate in this event from their side of the Jordan River. Also attending will be the Liberian peace activist and Nobel Peace Prize winner Leymah Gbowee considered a role model for the Israeli women’s peace group.
During each day of the Women Wage Peace event, 5-10 kilometers walks will be held in different locales around the country – in both Jewish and Arab towns, as well as communities along the Gaza and Jordanian borders – for those who cannot participate in the entire two-week trek. In addition, Women Wage Peace activists will hold special outreach activities with residents of local communities.

Solidarity walks in support of Women Wage Peace will also be held over the next two weeks in locations around the world, including San Francisco, New York, Florence, Paris and Berlin.
Women Wage Peace takes pride in being an inclusive organization, with religious and secular women, Arabs and Jews, and kibbutzniks and settlers among its core activists.  Last year, the organization set up a tent outside the prime minister’s home, where for a period of 50 days, 300 women rotated fasting. At the conclusion of the fast, a delegation of activists was invited into his home for a meeting with Netanyahu.