Outrage by UN, US after aid convoy, warehouse attacked in Syria 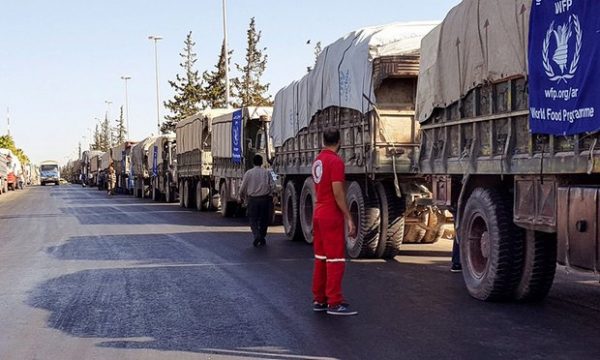 An aid convoy carrying life-saving aid to 78,000 people was attacked near the Syrian city of Aleppo Monday, according to the United Nations.

Officials from the UN and US said they were “disgusted” and “outraged” by the incident, which according to the UN saw 18 of 31 trucks in the aid convoy hit.

Twelve people involved in the aid delivery were killed, according to the Syrian Observatory for Human Rights, a UK-based organization that monitors the conflict in Syria.

No one has claimed responsibility for the attacks. It’s not clear whether the convoy was hit by an airstrike or shelled.

The Syrian Civil Defense, a volunteer EMS service, posted video of the aftermath of the attack on social media.

CNN cannot confirm its authenticity nor claims made in the video that the Syrian regime was responsible.
A Syrian Arab Red Crescent warehouse was also hit, according to the UN. The aid convoy and the warehouse were both in the area of Urum al-Kubra, to the northwest of Aleppo.
The SOHR said at least 32 people in total were killed in separate attacks in Aleppo and its western suburbs on Monday.
The violence came just hours after Syrian authorities declared that a fragile ceasefire in the war-torn country was over.

Getting aid to areas cut off by fighting has been a growing concern for humanitarian agencies — with trucks destined for eastern Aleppo, where an estimated 250,000 civilians have been short of food, medicine and water, prevented from getting through.
“Our outrage at this attack is enormous,” said Staffan de Mistura, the UN’s special representative for Syria. “The convoy was the outcome of long process of permission and preparations to assist isolated civilians.”
Stephen O’Brien, the head of the UN’s relief organization, said he was “disgusted” by the reports and said if it’s discovered that aid workers were deliberately targeted, that the strike would amount to a war crime.

The State Department also said it was outraged by the reports: “The destination of this convoy was known to the Syrian regime and the Russian federation and yet these aid workers were killed in their attempt to provide relief to the Syrian people.”

Before news of the attack broke, neither the US nor Russia — the countries which brokered the pact — publicly said that the ceasefire is over.

Though the US State Department did not directly lay blame for the attack, it said in a statement that it was an “egregious violation” of the ceasefire and would force it to reassess whether it will continue to cooperate with Russia.
“For more than a week, we have urged Moscow to fulfill the commitments it made in Geneva to facilitate the unimpeded flow of humanitarian aid to the Syrian people,” the statement said.
“And for more than a week, the Syrian regime repeatedly denied entry to these UN convoys, preventing them from delivering urgent food, water and medical supplies to desperate Syrian citizens.”

The initial hope was that the ceasefire would help bring a much-needed calm to the country’s hotspots and that it would create a safe enough environment to deliver humanitarian aid to those in need.
Although the ceasefire appeared to initially reduce the amount of violence in hard-hit areas like Aleppo, the delivery of humanitarian aid was delayed for days due to security concerns.
The International Committee of the Red Cross announced Monday that its team had reached the city of Homs in western Syria.

Though there were minor violations to the ceasefire in the beginning, it appeared to be holding at first.
By Thursday, Russia and the United States were accusing each other of not fulfilling their respective obligations under the agreement.
And the SOHR reported civilian deaths from airstrikes in Idlib on Friday and in Aleppo on Sunday, though it didn’t identify the perpetrators.
The US conducted an airstrike on Syrian forces on Saturday — the Pentagon said it accidental and US officials expressed regret.
But Vitaly Churkin, Russia’s ambassador to the UN, called the strike “an extraordinary display of American heavy-handedness” on Saturday.
CNN