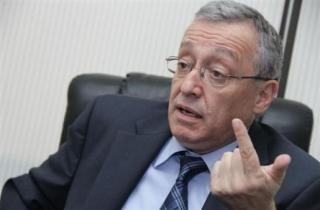 Future Movement bloc MP Ahmed Fatfat said on Monday that Hezbollah chief Hassan Nasrallah’s latest remarks about the return of former PM and Future Movement leader Saad Hariri to the premiership were only aimed at “misleading the Lebanese”, accusing Nasrallah of implementing an Iranian project that is aimed at obstruction .”

“ Nasrallah’s remarks were vague and general and did not contain anything that requires a response from former PM Hariri,” Fatfat said in a phone interview with al-Jadeed TV.

“Nasrallah should press his allies to elect (Free Patriotic Movement founder MP Michel) Aoun as president instead of trying to impose that on Hariri,” the MP added, describing Nasrallah’s alleged behavior as a “violation of democracy.”

“If Aoun has a majority of votes in parliament, let him go to parliament and we are willing to take part in the voting process,” Fatfat went on to say.

“The newspaper should have asked Future Movement sources, not March 14 sources,” he said.

Asked whether there are talks over a “compromise president,” Fatfat said such deliberations have been running for a long time now.

“We hope a consensual, centrist president will be elected and there are dozens of members of the Maronite community who are qualified for assuming this post. But there is an Iranian political decision that is being implemented by Hezbollah and it is aimed at obstruction,” the MP added.

Nasrallah had hinted in a speech on August 13 that Hezbollah would accept the re-designation of Hariri as prime minister in return for the election of Aoun as president and the re-election of Speaker Nabih Berri as the speaker of the parliament.

The Lebanese parliament failed again earlier this month and for the 43rd time in a row to elect a president to replace Michel Suleiman whose term ended on May 25 , 2014.