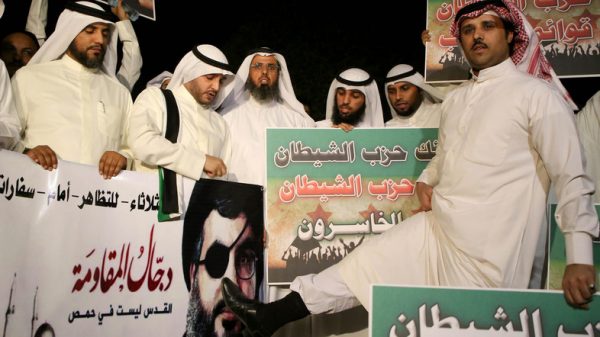 Kuwait’s court of appeals on Thursday upheld the death sentence for a Shiite citizen convicted of forming a pro-Iran cell and plotting attacks in the Gulf state.

Hasan Abdulhadi Ali has been a member of Lebanon’s Shiite Hezbollah militia since 1996 and is “the mastermind of the cell” of 26 members who had been accused of plotting attacks, the court said.

An Iranian had also been sentenced to death by a lower court but the appeals court did not look into his case on Thursday as he is on the run and must be present for the verdict to be announced.

The case of two Kuwaiti fugitives given jail terms by the lower court was also set aside until they appear in court, in line with Kuwaiti law.

The appeals court however confirmed a life term against another member of the cell while five others were sentenced to between two and five years in jail.

Members of the cell had been charged with spying for Iran and hiding large quantities of arms and ammunition in underground depots, including highly explosive materials.

In January, the lower court said that the Iranian cell member had recruited the Kuwaiti Shiites and arranged for their travel to Lebanon, where they received military training from Iran-backed Hezbollah.

It said that Ali had reached out to an Iranian diplomat at Tehran’s embassy in Kuwait City and later travelled to Iran, where he was in contact with the elite Revolutionary Guard.

Ali arranged with the Revolutionary Guard to smuggle large quantities of arms and explosives into Kuwait, the court said.

The verdicts can still be appealed before the supreme court.

Kuwaiti authorities said in August they had dismantled an Iran-linked cell and seized large quantities of arms, explosives and ammunition.

During the trial all 23 defendants present in court denied the charges and alleged that confessions were extracted under torture.

Iran denied any links to the group. Around a third of Kuwait’s native population of 1.3 million is Shiite.