Greece paralysed by general strike ahead of pension vote 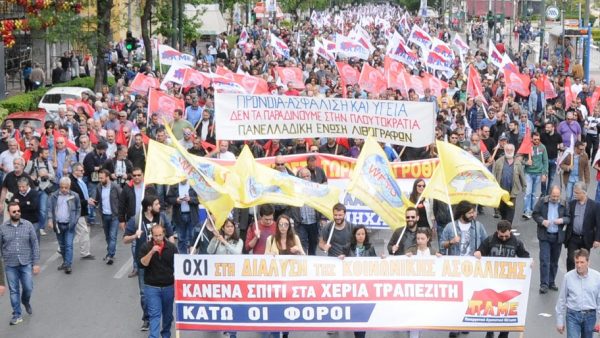 No trains were running across the country, and boats linking the Greek mainland to the islands were anchored at ports. In the capital Athens, the metro, tram and bus systems were all stationary, leaving taxis as the only form of available public transport.

“There’s been a complete paralysis when it comes to public transportation,” reported Nathalie Savaricas, FRANCE 24’s correspondent in Athens.

“Many people were left to either walk or take taxis to go to work – or their own cars for those who have them and can afford the gas, which is increasingly expensive (in Greece) despite the fall in prices worldwide.”

The public sector was operating at a snail’s pace, while most TV and radio stations were refusing to air news bulletins in the fourth crippling general strike since leftist Prime Minister Alexis Tsipras came to office in January 2015.

Greek airports were not affected, however, and privately-run inter-city buses were still operating.

Some 7,000 protesters kicked off the strike with a protest in central Athens.

But public anger over the cutbacks is not set to culminate until Sunday, with large demonstrations due to coincide with celebrations for International Workers’ Day, postponed from May 1 owing to the timing of Orthodox Easter.

The controversial pension and tax reforms are part of a package of painful measures demanded by the European Union and International Monetary Fund (IMF) in exchange for a huge €86 billion ($95 billion) bailout for debt-crippled Greece agreed last July.

Lawmakers are due to debate the latest austerity measures in parliament from Saturday morning, ahead of a vote on Sunday night.

The vote was initially scheduled for next week but Tsipras is hoping he can get the bill passed before Monday’s Eurogroup meeting of eurozone finance ministers, allowing fraught talks with the creditors to move on to the crucial issue of debt reduction.

Tsipras defended the measures on Friday, telling lawmakers from his left-wing Syriza party that they would spare the poorest.

Reforming Greece’s bloated pension system is crucial to prevent “the system collapsing in a few years”, the prime minister added.

Tsipras holds a slim majority of 153 seats in the 300-seat parliament, and Panyiotis Petrakis, economics professor at the University of Athens, said the general strike would not threaten the passage of the bill.

“The reforms will be adopted and it’s a good call to hold the vote before the Eurogroup,” Petrakis told AFP

“But it is still not clear that things will reach a conclusion on Monday,” he added.

“The distance between Athens and its creditors, which are demanding extra measures valued at 3.6 billion euros, remain significant.”

The creditors themselves were also at odds on Friday, with a leaked letter from IMF chief Christine Lagarde, published in the Financial Times, urging eurozone finance ministers to move the much-stalled talks on to the question of debt reduction.

The issue is pressing ahead of a huge Greek payment to the European Central Bank due in July, with fears growing that it could default if the issue is not resolved.

Lagarde stressed the need to revise down the goal of Greece achieving a primary budget surplus of 3.5 percent of GDP in 2018, saying it was “counterproductive” to expect Athens to meet the target.

Greece’s budget deficit has ballooned as it struggles to keep up with mammoth debt payments, which the IMF believes is unsustainable.