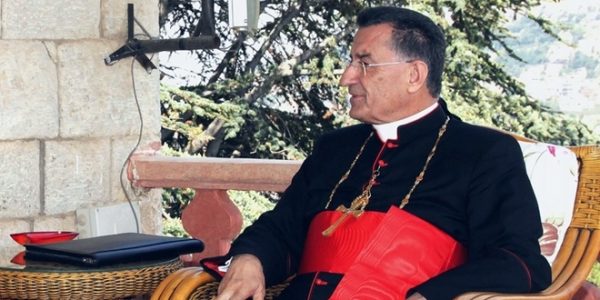 The meeting reportedly took place following a meeting Rai held with the French President Francois Hollande during his trip to Lebanon, the daily added.

Al-Akhbar quoted March 14 sources as saying that the two officials discussed the vacuum at the presidential post in light of a recent proposal to shorten the presidential term from six to two years as a temporary solution.

Bkirki had reportedly proposed the idea which was refuted by Beirut Maronite Bishop Boulos Matar who said that attempts to drag the name of the Maronite patriarchate in this debate “are not innocent.”

Sources at Bkirki did not make any comment about al-Rai’s meeting, but sources from the March 8 alliance said that communications between Bkirki and the leadership of Hezbollah are based on what the Patriarch heard from French sides who emphasized that the key to the presidential election is in the hands of Nasrallah.

Hezbollah sources did not confirm the reports which they described as rumors.

Last April, Hollande visited Lebanon where he met with senior officials and visited a Syrian refugee camp in the eastern Bekaa region.

The Lebanese parliament failed again last month and for the 38th time in a row to elect a president to replace Michel Suleiman whose term ended on May 25 , 2014.

As in the previous sessions the parliament was unable to reach a quorum because the Iranian-backed Hezbollah militant group and its ally MP Michel Aoun’s Change and Reform bloc MPs boycotted the session, because they could not reportedly guarantee Aoun’s election as a president

Speaker Nabih Berri a key ally of Hezbollah postponed the election to May 10, 2016, but so far it doesn’t look like we will have a president anytime soon.

Lebanese Forces leader Samir Geagea blamed Hezbollah on Friday for the country’s problems and vowed to step up efforts to get the country out of the present situation.

“The status-quo that we are witnessing will continue as along as Hezbollah assigns more priority to the regional interests that it believes are more important that Lebanon,” said Geagea.

Geagea who was the first to announce his candidacy decided to back Aoun in order end the current vacuum , but Hezbollah and Iran , according to analysts do not want a president for Lebanon at this stage despite the fact that they have the votes to guarantee Aoun’s election.