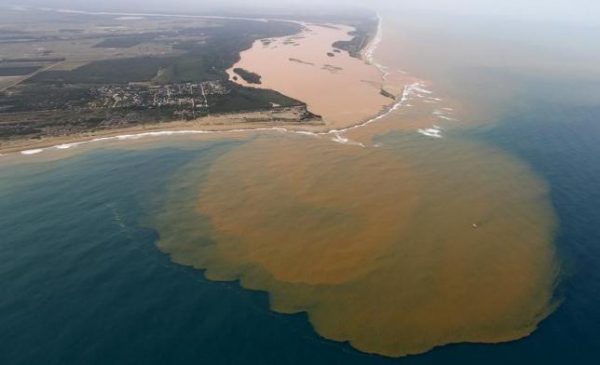 An aerial view of the Rio Doce (Doce River), which was flooded with mud after a dam owned by Vale SA and BHP Billiton Ltd burst, at an area where the river joins the sea on the coast of Espirito Santo in Regencia Village, Brazil, November 23, 2015. REUTERS/Ricardo Moraes
Share:
Mining companies Vale SA (VALE5.SA) and BHP Billiton (BLT.L) were hit with a 155 billion-real ($43.5 billion) civil lawsuit for the collapse of a dam at a mine last year that killed 19 people and caused damage that prosecutors said was comparable to BP’s oil spill in the Gulf of Mexico.

The 359-page lawsuit brought by independent federal prosecutors was the result of a six-month investigation and is also against state and federal governments. Prosecutors accused the state of Minas Gerais, where the dam collapsed in November 2015, of negligence in its monitoring of the build up of waste and water sludge left over from the companies’ mining venture, Samarco.

The total damages, prosecutors said, were calculated on the basis of the cost of the Deepwater Horizon oil spill in the United States. BP’s (BP.L) total pre-tax charge for that accident, in 2010, reached $53.8 billion.

The Brazilian prosecutors also demanded an initial payment of 7.7 billion reais. A judge in Brazil now has to accept the lawsuit.

Analysts said the comparison with BP’s oil spill would likely be contested, but nevertheless represented another headache for companies reeling from a commodities downturn and now facing the prospect of protracted litigation. The drop in prices of commodities such as iron ore has seen BHP lose almost half of its market value, and Vale more than a quarter, over the past 12 months.

BHP’s shares were trading 6.5 percent lower and Vale’s U.S. listed shares fell 7.5 percent in premarket trading, while the sector was down around 4 percent by 1015 GMT .FTNMX1770.

Hunter Hillcoat, analyst at Investec in London, said the BP Deepwater Horizon oil spill was “a completely unrelated incident” and the figures were an opening gambit.

Paul Gait of Bernstein said the case was political as prosecutors added to the pressure on President Dilma Rousseff, who is under fire over corruption allegations.

“They’re implying she had radically undersold the Brazilian people and was in the pockets of business,” he said.

The civil action comes after the Brazilian government in March reached a settlement with Samarco, Vale and BHP, in which the companies agreed to pay an estimated 20 billion reais.

Vale and BHP both said they had not received formal notice of the new claim.

BHP said in a statement to the Australian Securities Exchange it was “committed to helping Samarco to rebuild the community and restore the environment affected by the failure of the dam”.

It said the March agreement provided “the long-term remedial and compensation framework for responding to the impact of the Samarco tragedy and the appropriate platform for the parties to work together”.

In the civil case prosecutors said the compensation agreement was insufficient and lacked the legal mechanisms to ensure the companies would fulfil their obligations, making it little more than a “letter of intent”.