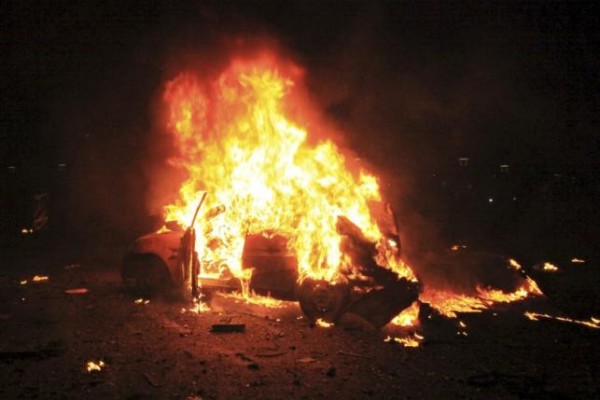 A vehicle burns after an explosion in Ankara, Turkey, March 13, 2016. REUTERS/Mehmet Ozer
Share:
A car bomb tore through a crowded transport hub in the Turkish capital, Ankara, on Sunday, killing at least 34 people and wounding 125 in the second such attack in the administrative heart of the city in under a month.

The blast, which could be heard several kilometers away, sent burning debris showering down over an area a few hundred meters (yards) from the Justice and Interior Ministries, a top courthouse, and the former office of the prime minister.

“These attacks, which threaten our country’s integrity and our nation’s unity and solidarity, do not weaken our resolve in fighting terrorism but bolster our determination,” President Tayyip Erdogan said in a statement.

Two senior security officials told Reuters the first findings suggested that the Kurdistan Workers Party (PKK), which has waged a three-decade insurgency for Kurdish autonomy, or an affiliated group, was responsible.

There was no immediate claim of responsibility, but Interior Minister Efkan Ala said the name of the group behind the attack would likely be announced on Monday after initial investigations were completed.

“Tonight, civilian citizens waiting at a bus stop were targeted in a terrorist attack with a bomb-laden car,” Ala told reporters after a meeting with Prime Minister Ahmet Davutoglu, the head of the intelligence agency and security chiefs.

“Significant findings have been made, but the organization behind this will be announced once the investigation has been finalised,” he said.

NATO member Turkey faces multiple security threats. As part of a U.S.-led coalition, it is fighting Islamic State in neighboring Syria and Iraq. It is also battling PKK militants in its southeast, where a 2-1/2-year ceasefire collapsed last July, triggering the worst violence since the 1990s.

The bombing came two days after the U.S. Embassy issued a warning that there was information regarding a potential attack on government buildings in the Bahcelievler area of Ankara, just a few km (miles) away from the blast site.

The United States condemned the attack, saying in a White House National Security Council statement: “This horrific act is only the most recent of many terrorist attacks perpetrated against the Turkish people. The United States stands together with Turkey, a NATO ally and valued partner, as we confront the scourge of terrorism.”

Health Minister Mehmet Muezzinoglu said 30 of those killed had died at the scene, while the four others died in hospital. At least one or two of the dead were attackers, he said, and 19 of the 125 wounded were in critical condition.

One of the security officials said the car used in the attack was a BMW driven from Viransehir, a town in the largely Kurdish southeast, and that the PKK and the affiliated Kurdistan Freedom Hawks (TAK) appeared to be responsible.

TAK claimed responsibility for the previous car bombing, just a few blocks away, on Feb. 17. That attack targeted a military bus as it waited at traffic lights, and killed 29 people, most of them soldiers, near the military headquarters, parliament and other key government institutions.

A police source said there appeared to have been two attackers, one a man and the other a woman, whose severed hand was found 300 meters from the blast site.

The explosives were the same kind as those used on Feb. 17 and the bomb had been reinforced with pellets and nails to cause maximum damage, the source told Reuters.

The pro-Kurdish opposition HDP, parliament’s third largest party, which Erdogan accuses of being an extension of the PKK, condemned what it described as a “savage attack”.

State broadcaster TRT said the car had exploded at a major transport hub, hitting a bus carrying some 20 people near the central Guven Park and Kizilay Square at 6:43 p.m. (1643 GMT).

An Ankara court ordered a ban on access to Facebook (FB.O), Twitter (TWTR.N) and other sites in Turkey after images from the bombing were shared on social media, broadcasters CNN Turk and NTV reported.

“There can be no justification for such heinous acts of violence. All NATO allies stand in solidarity with Turkey, resolute in our determination to fight terrorism in all its forms,” NATO Secretary-General Jens Stoltenberg said.

Australian Foreign Minister Julie Bishop said the country’s ambassador to Turkey, James Larsen, was in a car at an intersection 20 meters from where the bomb was detonated.

“It really does bring it home to us that a terrorist attack can take place at any time, anywhere,” Bishop told Nine Network television while on a diplomatic trip to Fiji. “We utterly condemn these barbaric attacks on civilian populations.”

“It was an appalling thing for him to witness, being so close, but he’s fine,” she added of the ambassador.

Turkey sees the unrest in its largely Kurdish southeast as deeply linked to events in northern Syria, where the Kurdish YPG militia has been seizing territory as it fights both Islamic State and rebels battling President Bashar al-Assad.

Ankara fears those gains will stoke separatist ambitions among its own Kurds and has long argued that the YPG and PKK have close ideological and operational ties.

In its armed campaign in Turkey, the PKK has historically struck directly at the security forces and says that it does not target civilians. A direct claim of responsibility for Sunday’s bombing would indicate a major tactical shift.

Islamic State militants have been blamed for at least four bomb attacks on Turkey since June 2015, including a suicide bombing that killed 10 German tourists in the historic heart of Istanbul in January. Local jihadist groups and leftist radicals have also staged attacks in Turkey in the past.