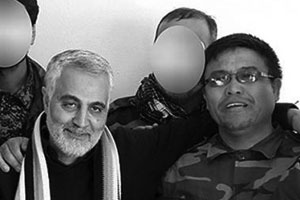 Ali Reza Tavassoli (R) wih Qassem Suleimani, head of the Quds force of the Iranian Revolutionary Guards
Share:
One of the most prominent foreign mercenaries of the Iranian regime fighting for Syrian dictator Bashar Al-Assad was killed on Saturday in southern province of Daraa.

The remains of Ali Reza Tavasooli and six others killed in Syria will be buried on Wednesday in city of Mashhad.

The Iranian Revolutionary Guard Corps (IRGC) has been recruiting thousands of Afghan refugees to fight against the Syrian people.

The Afghan refugees are granted residency in Iran and paid $500 a month to fight for Bashar Assad, according to Afghan and Western officials, reported the Wall Street Journal in May.

A video obtained by CNN from Syrian rebels last November showed an Afghan prisoner who said: “The Iranians pay people like me to come here [Syria] and fight. I am from Afghanistan and I am an immigrant in Iran. The Iranians brought us to Syria to fight.”

He said he was paid about $500 a month to fight. There are many Afghan immigrants in Iran trying to find some shelter from the decades of war that have torn apart their land.

Afghan religious leaders in Iran and local officials in Afghanistan have confirmed the IRGC’s role in hiring Afghan refugees to fight in Syria.

Occasionally Afghans hold protests outside the Iranian regime’s embassy in Kabul protesting against abuse of their countrymen in neighboring Iran.