Hezbollah facing resistance from within over its Syria role 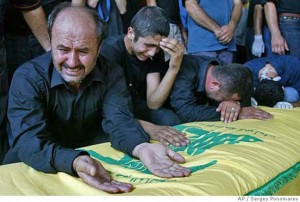 According to a Sunday report by ‘Asharq Alawsat’ a delegation of the parents of the Hezbollah fighters that were killed in Syria told the organization that they proudly sent sons to fight Israel, but they consider the defense of Syrian regime “flawed and intolerable.”

The report quoted a source familiar with the situation as saying the delegation, consisting largely of people who had lost loved ones in Syrian battles from the Baalbek region, made their request to Hezbollah Shura Council member Mohammed Yazbek.

Thousands of the Iranian-backed Shiite group’s fighters have been supporting the Syrian regime of president Bashar al Assad in his fight against Syrian rebels. Currently , the Hezbollah fighters are aiding Assad in his offensive on the strategically important central city of Homs.

According to the report many Lebanese see Hezbollah leader Sayyed Hassan Nasrallah’s support for Assad against an insurgency dominated by Syria’s Sunni majority as a miscalculation that will drag Lebanon into the Syrian quagmire and deepen Sunni-Shiite sectarian rifts in the region.

The paper quoted Hezbollah sources as saying the group is aware of the growing criticism in Lebanon and the Arab world for their support of the Syrian regime and therefore must send a delegation to Iran to clarify that it can no longer bear the burden of supporting the Syrian regime alone and that Iran must increase the participation of its own operatives in the war.

According to a report by Reuters published last Friday , Gulf Arab states are punishing Hezbollah for its role in Syria by expelling Lebanese expatriates linked to the group in a move that could victimize Shiite Muslims with no ties to the militants apart from their shared religious faith.

The Sunni Muslim Gulf countries, led by regional powerhouse Saudi Arabia, have supported Syrian rebels with arms and money in a fight to topple President Bashar al-Assad, an ally of Iran.

Denouncing what it called Hezbollah’s interference in Syria, the Gulf Cooperation Council (GCC) last month announced its six member states would revoke the residency visas of people associated with Hezbollah and target their financial and commercial dealings in the Gulf.

During a meeting of senior GCC security officials in Riyadh on Thursday, the undersecretary of Bahrain’s Interior Ministry, Major General Khaled al-Absi, said the move against the group came after the “discovery of several Hezbollah terror cells in the Gulf states, their involvement in training of terror groups … and their flagrant involvement in Syria.”

“Unfortunately, some people will pay the price without being involved,” Abdulkhaleq Abdullah, an Emirati political scientist, said of the deportations.

“But Hezbollah should be held responsible for this. Hezbollah left its national boundary and interfered in a purely Syrian matter with brazenness and stubbornness. This should not be left unheeded.”

At least three Gulf states — Saudi Arabia, the UAE and Qatar — have evicted scores of Lebanese since the GCC announced on June 2 they were considering punitive measures against the group, according to a Doha-based security source and Hassan Alayan, a Lebanese critic of the campaign.

The security source said 17 or 18 Lebanese Shiites were expelled from Qatar in June while Gulf-based analysts following the matter suggested the number could be larger in the UAE.

“I don’t know what’s their interest in expelling people who lived in their countries for decades and offered the best they could in service of these countries,” said Alayan, a Shiite Muslim who added that he had lived in the UAE for 27 years before being told in 2009 to leave.

This is a result, analysts say, of a longstanding view among some states that Shiites are a security threat, mainly because of what Gulf Arab officials say is Iranian meddling in Arab internal affairs. Iran denies such accusations.

Alayan told Reuters he knew of at least 400 Lebanese families who had been evicted from the UAE alone since 2009, but believed the number was bigger. “This is repressive. People have lost their investments and their livelihood,” he said. “They want to create a financial burden on a certain party in Lebanon (Hezbollah) to tell them that if it were not for them, this would have not happened.”

Lebanese migration to the Gulf started after World War Two with the discovery of oil in Saudi Arabia and Kuwait and in the 1980s to other countries, especially the UAE, Guita Hourani, Director of the Lebanese Emigration Research Center at Notre Dame University in Lebanon, wrote in a 2010 paper.

There are appproximately 500,000 Lebanese in the gulf of which about 18 % are Shiites according to Lebanese economist Ghazi Wazni