Hezbollah official claims his party and FPM moving in one direction 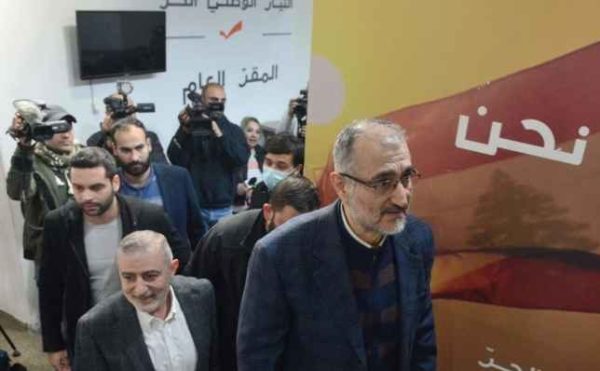 Hussein Al-Khalil said, after his delegation met for 3 hours with MP Gebran Bassil:

“Hezbollah and the Free Patriotic Movement are moving in one direction, and we are not in a state of collision.”

Al-Khalil stressed that “the session was very frank and clear on the issue of the presidency and the government, and we agreed that the discussion is relevant, and this meeting will not be the last.”

he stressed that “the Mar Mikhael understanding exists, and we did not see any resentment from Bassil in this regard, and we in the country have a permanent political debate, and we are not one party, but two parties and two ways of thinking, and we are working on common spaces.”

And he stressed that “the Mar Mikhael understanding continues , and we did not see any resentment from Bassil in this regard, and we in the country have a permanent political debate, and we are not one party, but two parties and two ways of thinking, and we are working on common interests .”

Commenting on the resumption port blast investigation by judge Tarek Bitar , he said that “Hezbollah has an opinion on the judicial issue, and went on to he criticize the judge

In turn, Hezbollah security chief Wafic Safa said: “Those who are immersed in the ( FPM/ Hezbollah memorandum of understanding tonight will not be happy.”

It is worth nothing that Safa in 2021 went to the Palace of Justice and threatened the judges. This is documented and known to everyone, and Hezbollah has been attempting to prevent any investigation ever since the blast took place in August 2020.

Al-Jadeed TV reported that Hezbollah will try for a last time to convince Bassil with its presidential candidate al-Marada leader Suleiman Franjieh, adding that Hezbollah had previously informed Progressive Socialist Party leader Walid Jumblat that Franjieh is the only candidate trusted by Hezbollah.

On the other hand Al-Akhbar newspaper which is closely aligned with Hezbollah denied what Al Jadeed reported and said Monday that prominent sources have told it that the main goal of the meeting is an attempt to repair the relation between Hezbollah and the FPM, to try to prevent that the understanding from turning into rivalry.

“Hezbollah chief has already told Bassil about Hezbollah’s candidate, and Bassil’s position on rejecting Franjieh is known,” the sources said.

The FPM for its part welcomed the meeting initiative, al-Akhbar added.

“We do not want disagreement. Our hand is extended and our heart is open,” prominent FPM sources reportedly told the daily.

But the sources added that what happened cannot be fixed only with a meeting but needs to be addressed and resolved.

According to observers Hezbollah is repeating the same Scenario as in 2016 when it insisted on the election of its ally FPM founder Michel Aoun as the president .

Many see Franjieh as Aoun #2

FPM ‘s chief is dead against the election of Franjieh or Army chief General Joseph Aoun and for this reason Hezbollah cannot count on FPM to vote for Franjieh .

The meetings of Hezbollah delegations raised concerns within the anti-Hezbollah camp that Jumblatt may be flip-flopping again as he did in 2009 when he quit the March 14 alliance which led to its collapse, and in 2022 when he voted for Nabih Berri as the speaker , despite the fact that he has been in that post for 30 years.

One pro-hezbollah reporter suggested today in an interview on Hot Spot that the parliament could be dissolved by Speaker Nabih Berri, a close ally of Hezbollah if no president is elected by June

There are many concerns that Lebanon is heading for more political instability and security issues . One retired General revealed today that there is more than one million gun in the hands of Lebanese citizens and parties. This doesn’t not include the weapons of the heavily armed Hezbollah.

According to the most recent reports , emigration continues at much higher rate

Lebanese are being displaced by Syrian refugees . Lebanon’s interior minister declared last Friday that half the population in Lebanon is now made up of Syrian refugees.

Aoun and his political team have failed to accomplish any significant reforms, “despite having the largest parliamentary and ministerial blocs,” another analyst told me.

For these reasons, analysts agree that Lebanon needs a capable , independent and sovereign president that will be able reclaim the country that used to be called the Switzerland of the East and not a president like Franjieh , who will be a rubber stamp like Aoun before him to Hezbollah’s Nasrallaah who openly and without any reservations declared his allegiance to the rulers of Iran and proclaimed that he is a soldier in Iran’s Wilayat al Faqih

Lebanese Forces leader Samir Geagea declared on Sunday that “all political options are on the table to liberate Lebanon and its people from the hegemony of Hezbollah and its allies.”