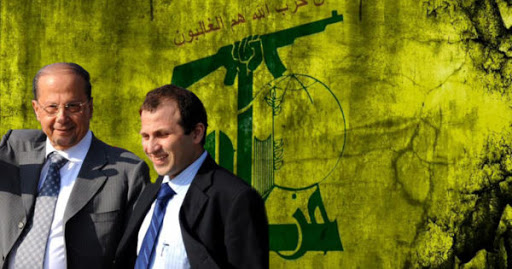 File photo: Ex Lebanese president Michel Aoun L is shown with his son-in-law FPM leader Gebran Bassil . The background is the flag of their ally the Iranian backed Hezbollah militant group. The justifications for the Hezbollah / FPM alliance faded when Aoun’s presidency ended in October 2022. Bassil, says the FPM agreement with Hezbollah is “at stake”. Both parties are drifting apart , because the benefits that both sides had derived from the alliance have steadily waned.
Share:

The benefits that the Free Patriotic Movement and Hezbollah had derived from the alliance have steadily waned, whether as a result of Bassil’s private interests or Hezbollah’s calculations on regional balances.

A critical turning point in Lebanese politics was marked by the 2006 signing of the Memorandum of Understanding between Hezbollah and the Free Patriotic Movement and the subsequent tight political cooperation between the two parties. Through this connection, Hezbollah was able to strengthen its political position by teaming up with a movement that is well-liked among Lebanese Christians.

The FPM, on the other hand, strengthened its position in Lebanese politics as a result of its affiliation with the most influential local party, allowing it to install its founder and leader Michel Aoun as president of the republic. But during the past 16 years, this partnership has been one of the key drivers of the political unrest in the nation.

The political landscape of Lebanon is about to undergo a significant change as a result of current developments. The leader of the FPM, MP Gebran Bassil, who is also Michel Aoun’s son-in-law and political heir, stated unequivocally that the agreement his movement has with Hezbollah is “at stake.” There is some indication of Bassil’s cynicism regarding the significance of this alliance in the slogans he has raised, such as “There is no value in any national understanding that contradicts a balanced partnership.”

Although these declarations were made against the backdrop of divergent approaches by the two parties to numerous local issues, they actually reflect Bassil’s projections for his political future and the regional impacts brought on by his international connections. Aoun, the FPM’s founder and godfather, is still alive, but Bassil has taken over as its leader and de facto head, tying the movement’s affiliations and decisions to his goals and aspirations.

The divergence between the two parties raises numerous questions, especially in light of potential future political pressure Hezbollah may encounter, when it comes to its weapons should it lose its ally, which has the support of a sizeable portion of Christians in Lebanon.

This is of particular importance today as Hezbollah suffers from a dearth of support for its arsenal among all other sects, with the exception of the Shiites, which Hezbollah Secretary General Sayyed Hassan Nasrallah leads along with his ally, Parliament Speaker and head of the Amal Movement, Nabih Berri. Furthermore, this split raises questions about Bassil’s options and the type of alternative alliances he may forge.

The main objectives of the two parties’ alliance

The rupture between the two parties clearly reflects the erosion of the reasons that prompted them to conclude an alliance in the first place. To understand the FPM’s rationale for questioning the value of continuing its agreement with Hezbollah, it is worth looking at what led them to form this alliance 16 years ago, and the type of interests on which it was based.

At the end of 2005, eight months after his return from his exile in France, Aoun ran in the parliamentary elections and won around 70 per cent of the Christian vote. The main problem he faced at the time, however, was his exclusion from representation within the government and in administrative appointments within state institutions, considering that he represented the majority of Christian voters.

Restoring the rights of Christians was always one of Aoun’s main slogans. This was intended to convey that the marginalization he experienced as a Christian leader also affected a sizable portion of the Christians in Lebanon.

The March 14 alliance, which comprised the parties behind the 2005 independence uprising known as the “Cedar Revolution” opposing Syria’s tutelage over Lebanon, was Aoun’s main rival in this race. Despite the fact that Aoun joined these forces in the “independence uprising” and sang the same anti-Syrian rhetoric, the disagreement over Aoun’s role within the administration eventually gave rise to conflicts between him and these parties during and after the 2005 legislative elections.

As a consequence, the FPM was not a part of the first government formed following the vote, in which the March 14 forces won a majority in Parliament. Instead, the March 14 camp included Christian ministers affiliated with other parties.

Thus, despite his 15-year exile for opposing Syria’s presence in Lebanon between 1990 and 2005, and despite criticizing this tutelage and Syria’s most visible partner, Hezbollah, during this time, Aoun’s position radically changed following his return to Lebanon in 2005. The March 14 coalition, which formed in 2005 in opposition to Syria’s occupation of Lebanon and Hezbollah’s weapons, became Aoun’s principal rivals, swiftly capturing both the legislative majority and the executive.

In the period that followed, Aoun shifted his focus from advocating “state sovereignty,” opposition to Hezbollah’s weapons, and concern over Syria’s meddling in Lebanese affairs to making the share of power for Christians his top demand.

Hezbollah already had good reason to resist March 14 forces’ takeover of power and to create an alliance in opposition to the coalition. Hezbollah never imagined this collaboration as anything more than one of the color revolutions the West promoted to undermine the regional resistance axis. These forces demanded the handover of all “weapons beyond the state’s authority,” i.e., Hezbollah’s arsenal, amid pressure to drive the Syrian army’s withdrawal from Lebanon in 2005. The party regarded this demand as an immediate threat that could not be overlooked.

Thus, the groundwork for bringing the FPM and Hezbollah together was established since 2005. Hezbollah required powerful partners from other sects to provide political cover so that its weaponry wouldn’t be targeted by the government, but the movement also desired supporters from other sects to retake power and control the percentage of Christians in the government. The basic goals of this relationship from 2006 to the present are expressed in this equation between the two parties.

The alliance’s most important gains

Since 2006, this alliance has been able to make important gains for both sides. Between 2006 and 2008, they waged a battle by way of tumultuous street demonstrations to overthrow the government formed by the March 14 forces. The government finally resigned in 2008 following a large-scale militaryoperation by Hezbollah in response to decisions to dismantle a private telephone communications network run by the party.

The FPM, Hezbollah and their allies subsequently entered the new government along with March 14 parties, which had the parliamentary majority, as part of a settlement that gave the Hezbollah-FPM alliance a sufficient share to block any decision within Cabinet. Thus, the FPM entered power in Lebanon as a key partner.

Over the following years, the FPM benefited from Hezbollah’s votes during the elections and, with the party’s support, was able to impose an electoral law that would enhance its share in Parliament.

Between 2014 and 2016, the two parties, along with their allies, were able to prevent the required constitutional quorum in sessions held to elect the country’s president, plunging Lebanon into an extended period of presidential vacuum. In this manner, then FPM leader Aoun was able to impose settlements with all political parties that ultimately led to his election as president.

After political balances significantly shifted in favor of Hezbollah and the FPM during that time, Hezbollah was able to gradually put an end to discussion as to its arsenal within constitutional institutions and the political system. Instead, matters progressed to the point that the March 14 coalition was disbanded and its members dispersed.

Reasons for maintaining the alliance wane

The justifications for this alliance eventually faded when Aoun’s presidency ended in October 2022. Bassil, the FPM’s current leader, is pondering his political choices at the moment. He acknowledges that his movement’s affiliation with Hezbollah was to blame for his inclusion on the U.S. sanctions lists, which resulted in his isolation from the international community.

Bassil is therefore seeking agreements that might result in the lifting of those sanctions, even if it means giving up part of the negotiating leverage that his relationship with Hezbollah once provided. In other words, Bassil’s relationship with Hezbollah no longer serves as a lever for him; rather, it serves as a crutch that keeps him from attaining his political objectives.

In addition, following the end of Aoun’s term as president, and Lebanon’s descent into a presidential vacuum, Hezbollah does not seem prepared to support Bassil in his quest for the presidency as it did previously in Aoun’s case. This is due to reservations by Hezbollah’s other allies regarding Bassil, and perhaps also because the party is seeking a president with good ties to Western and Gulf nations, but without an aversion toward the party or its weapons.

In light of the current economic collapse, Hezbollah is aware that Lebanon needs a president who, unlike Bassil, can secure external support to avoid further popular resentment against the party due to the financial crisis.

The benefits that both sides had derived from the alliance have steadily waned, whether as a result of Bassil’s private interests or Hezbollah’s calculations on regional balances. The party’s contempt for the FPM’s objections to conducting a Cabinet session—which its ministers attended despite the FPM’s ministers boycotting it—was the straw that finally broke the camel’s back.

The movement reverted back to its original slogan of safeguarding the rights of Christians in Lebanon since it saw conducting the session without its Christian ministers as a marginalization of the Christian constituents they represent.

Therefore, as is customary, the FPM like all Lebanese parties often engages in disputes with overtly sectarian overtones whenever disagreement on matters pertaining to the personal interests of their leaders, arise.

This article was translated from Arabic.