The hidden history of how U.S. was used by Zionists to create Israel , video 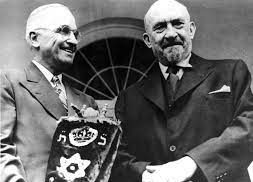 File photo of US president Harry S. Truman with Chaim Azriel Weizmann, a Russian-born biochemist, Zionist leader and Israeli statesman who served as president of the Zionist Organization and later as the first president of Israel. Despite warnings by his top advisor Dean Acheson and others , President Truman supported establishing a Jewish state on land primarily inhabited by Muslims and Christians. Truman was the first to recognize the establishment of Israel on May 14, 1948,
Share:

In this video Alison Weir, Executive Director of If Americans Knew, President of the Council for the National Interest, and author of the book “Against Our Better Judgment, tells the the hidden history of how the U.S. was used by the Zioinists to create Israel.

Alison Weir was highly commended for throwing such a brilliantly hard light on the relationship between the United States and Israel.

US statesman Dean Acheson who was the 51st U.S. Secretary of State from 1949 to 1953 and who served as president  Harry S. Truman’s advisor from 1945 to 1947, warned that creating Israel on land already inhabited by Palestinians would “imperil” both American and all Western interests in the region.

Despite warnings such as this one, President Truman supported establishing a Jewish state on land primarily inhabited by Muslims and Christians.

Few Americans today are aware that US support enabled the creation of Israel. Even fewer know that US politicians pushed this policy over the forceful objections of top diplomatic and military experts. As Acheson reveals in her book AGAINST OUR BETTER JUDGMENT . Those politicians were bombarded by a massive pro-Israel lobbying effort that ranged from well-funded and very public Zionist organizations to an “elitist secret society” whose members included Supreme Court Justice Louis Brandeis.

AGAINST OUR BETTER JUDGMENT provides a clear view of the history that is key to understanding one of the most critically important political issues of our day.