Zelensky: Iran and Russia are a ‘terrorist alliance’, video 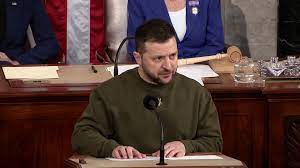 Ukrainian President Volodymyr Zelensky is shown during his address to a joint meeting of the U.S. Congress on Wednesday night, as lawmakers are poised to approve billions more in aid for his country’s response to the Russian invasion.
Share:

The Ukrainian military high command earlier said their air defenses had shot down 23 of 28 drones – most over the capital Kyiv. It was Moscow’s third air strike in six days and the latest in a series since October targeting the Ukrainian power grid, causing sweeping blackouts amid sub-zero temperatures. No casualties were reported as a result of the drone strikes, the Ukrainian military high command said in its evening update, though nine buildings were damaged in the Kyiv region.

Zelenskyy came to Washington to meet US President Joe Biden and secure more aid for Ukraine as it fights against Russia’s invasion of the country.

Speaking in his quintessential army green sweatshirt, Zelenskyy spent much of the speech bashing Russia and thanking the United States for its support. He also referenced Iran’s alleged military support for Russia in the Ukraine war.

“When Russia cannot reach our cities by its artillery it tries to destroy them with missile attacks and allies in the genocidal policy with Iran,” said Zelenskyy. “Iran has become a critical threat to our infrastructure. The terrorists have found each other.”

“It is just a matter of time before they strike your other allies if we don’t stop them now,” he added.

“If they attack us with Iranian drones and our people will have to go to bomb shelters on Christmas Eve, Ukrainians will still sit down at the holiday table and cheer up each other,” he said.

There have been numerous indications from the West that Iran is supplying Russia with drones in the Ukraine war. Reports of Iranian drones being used in Ukraine began to gain steam in the fall. In October, Iran denied its drones were being used in the conflict, despite the evidence to the contrary. The same month, the White House said that Iran directly engaged militarily in Ukraine.

Earlier this month, US National Security Council spokesman John Kirkby said that Iran’s supply of drones to Russia is “continued.”

Iranian and Western officials sparred over the drone allegations at a United Nations Security Council Tuesday.

Zelenskyy made a point to strike a bipartisan tone in the speech, thanking Democrats and Republicans. The criticism of Iran could win him empathy from hawks in both parties.