Biden promises Zelensky to back Ukraine ‘as long as it takes’ 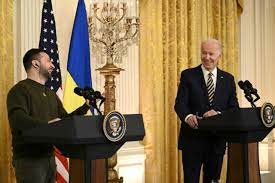 US President Joe Biden promised his Ukrainian counterpart Wednesday that Kyiv will “never stand alone,” as Volodymyr Zelensky took a hard line on the return of all territory seized by Russian forces.

Biden also made clear to Zelensky — who was on his first trip outside of Ukraine since Russia invaded in February — that there were limits to the type of support that can be provided to Kyiv without risking divisions among its allies.

“Ukraine’s fight is part of something much bigger,” Biden said at a joint press conference with Zelensky by his side, pledging that the United States would lend its support against “Russian aggression” for “as long as it takes.”

Zelensky, who primarily spoke through a translator, made clear that he will not be pushed into a settlement that leaves Ukrainian territory — some of which Moscow claims to have annexed — in Russian hands.

“For me as a president, ‘just peace’ is no compromises as to the sovereignty, freedom and territorial integrity of my country; the payback for all the damages inflicted by Russian aggression,” he said.

The Ukrainian leader also expressed his gratitude to Washington for agreeing to provide the advanced Patriot air defense system as part of $1.85 billion in military assistance announced in parallel with his visit.

“The strongest element of this package is the Patriot battery systems, something that will strengthen our air defense significantly,” Zelensky said. “This is a very important step to create a secure air space for Ukraine.”

Biden said he is confident that the Western alliance in support of Ukraine would remain united.

“I’m not at all worried about holding the alliance,” Biden said. “I feel very good about solidarity and support for Ukraine.”

But he also made clear that there are limits to what Ukraine’s allies will agree to provide.

“The idea that we would give Ukraine material that is… fundamentally different than is already going there, we’d have a prospect of breaking up NATO and breaking up the European Union, and the rest of the world,” Biden said.